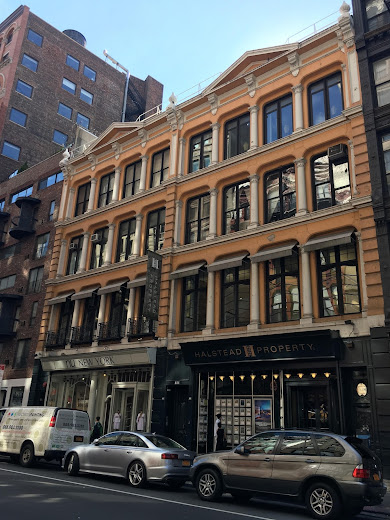 In the late 1950s, Willem de Kooning had a studio in No. 827, one piece of the history of these buildings uncovered by the Greenwich Village Society for Historic Preservation (GVSHP).

GVSHP Executive Director Andrew Berman co-authored an op-ed at the Times this past week, providing more history of the addresses and making the case for why they should be landmarked:

Despite protests by preservationists, elected officials and neighbors, two developers, Quality Capital and the Caerus Group, intend to demolish it and build a 14-story tower. (Caerus is the Greek god of opportunity and luck who seizes favorable moments.)

In August 2016, the Landmarks Preservation Commission rejected an application to protect 831 Broadway and its next-door twin, 827. According to its director of research at the time, the commission decided that New York already had enough buildings with “earlier cast-iron facades” and that “there are buildings on Broadway of a similar date, type and style” to represent this era of development in New York.

Fortunately, the commission has recently agreed to reconsider that decision, and the developers have agreed to withdraw their application for a demolition permit pending the reconsideration. Now the commissioners must decide whether to take the first formal step toward considering the buildings for landmark status and vote to “calendar” them — put them on the docket for active consideration for designation — which would be followed by a public hearing and a vote.

You can read more about these buildings at the GVSHP website here.

Previously on EV Grieve:
Report: 14-story building planned for 827 Broadway
Posted by Grieve at 11:58 AM

On the Greenwich Village Society for Historic Preservation website, you can sign a letter urging the Mayor and the Chair of the Landmarks Preservation Commission to preserve these buildings.

I'm sure that 60M included a minimum 3M (5%) cash bribe in a black valise to the Landmarks Preservation Commission to have them greenlight demolition.

god those things are beautiful; at least keep em and build on top of them; ANYTHING!!!

The moment the LPC knows someone or some group wants a building saved, they vote to allow demolition. Absolutely useless bureaucracy run by petty satraps. I doubt the Italian government ever said, Oh we have enough ancient buildings from the 2nd century BC, we can let this one be ripped down, so the LPC's "logic" leaves me beyond disgusted. I hope I am wrong, but I bet they'll come back and give the thumbs down. Those lovely buildings are most likely doomed.

Developers and the bribed colleagues in City Government will not be happy until every building can potentially be "developed". This is urban strip-mining with zero regards to the history and character of our neighborhoods must be fought. I urge everyone to support the efforts by the Greenwich Village Society for Historic Preservation.

And a nice contribution to De Blasio's re-election.