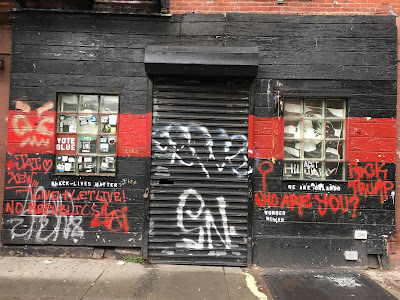 Eastern Bloc is hosting its farewell party this Sunday evening.

Thank you all for the last 12 years. Sunday will be our closing night. Come by this week for some final fun. See you in the fall for @clubcumming

As a gay man, in his early 40's, who happens to also live in Alphabet City, I haven't been inside Eastern Bloc in probably 2 to 3 years. My experiences of this venue aren't great. The bartenders seemed to have too much attitude. And the dark, smelly grunge feel wasn't my scene. Who knows? I am one of the very few in my community who doesn't care for bars. But perhaps Cummong's transition of power and ownership might do the trick into making it a cool and open destination where older dudes like me (hence 42) don't feel out of place or irrelevant enough to walk through the door.

When I was young I occasionally went to gay bars but preferred places like the Pyramid (early 80's) End of the World as well as some of the larger dance places because they we mixed with a bigger variety of people and not exclusively filled with gay men. An old man I was dating was shocked when I brought him to the Pyramid because there were women and men that were most likely not gay. At that time I thought the "stay with your own kind" was not interesting enough of a social scene. I have not been in a gay bar for decades now but have heard some suffer from "bridesmaids invasions" occasionally which kind of gets on the nerves of regular clientele. The idea of "inclusive" is hard to achieve in any bar when you think about it. Local bars are hangouts for locals and owners will do what it takes to make those customers feel comfortable and set the right atmosphere. This place seems to be looking outside of the neighborhood to sustain itself and have a celebrity behind it will bring tourists for certain. One cannot change human nature with a sentence like "No judgments, no attitude, no rules, except kindness, acceptance and fun." which to me sounds like they are opening a gym.

You know, in so many ways, bars are not what they used to be. As another young gay man himself (35), I meet men online and through apps. It cuts through a lot work. I can be in my boxers in bed with the TV on while I stroll through my phone. The only time I ever hooked up with a guy at a bar was almost a decade ago. Now, I think people go to bars to either catch up with friends or drink their problems away.

I am curious to see what this transformation will become. While I didn't go to EB that much, it had a dirty and seedy vibe to it, much like some of the gay S & M bars in Berlin. I liked how this spot was unlike the others. Even the exterior stood out from the rest. That black and red paint with the weird door.

I used to be a big bar-goer, but stopped a couple of years ago when all the places I liked either disappeared or the people who frequented them did. A low-key neighborhood place is really hard to find these days and going out has lost all its joy for me. With a celebrity name attached to this place, it will likely draw a big crowd, but perhaps the trendiness will taper off at some point and the place will grow into its own identity. I wish them luck.

Daniel Nardicio whom the NYT dubbed the "King of Sleaze" is also involved in this venture. They have been testing the waters with book readings and cabaret acts of the downtown variety in the early evening.

I never liked this bar - always thought the owner and his bartenders were snotty and non welcoming. Good riddance.

I guess the really old gay guy here (53), but I remember when this space was Wonder Bar and wayyy before that..the Chameleon. Now THAT was an excellent EV Bar.

NYC is so over it's over and over.