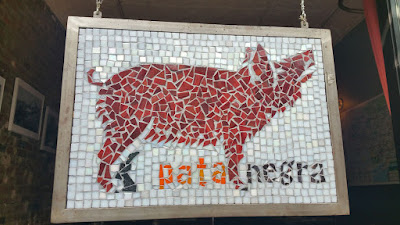 Pata Negra, the 25-seat Spanish tapas and wine bar on 12th Street just west of First Avenue, has closed for business as of July 31.

Chef-owner Rafael Mateo told me this in an email yesterday: "10-year lease expired. Cost of doing business and the changing East Village contributed to decision not to renew."

In 2010, Mateo wrote a compelling post (H/T Eater) on his blog about the trials and tribulations of running a restaurant in NYC. He addressed the hell that is the NYC Department of Health.

The Department of Health has been on a witch hunt. I understand the need for transparency with its newly implemented grading system, and further agree with the best conditions for public safety. But make no mistake about it, the DOH agenda is about making money for the city, period. Every day at 66 John Street, hundreds of owners are crammed into a stuffy room with a 10:00 am appointment summons to testify against all of the violations heaped upon their respective businesses during the latest visit from a DOH inspector. The owners are iced all morning; on my latest appointment I arrived before 10 am and was seen at 3:30 pm, all for an opportunity to be heard by a “judge”, whose qualifications are suspect. The owners are called like cattle into a room with the “judge”. A tape recorder is turned on, the owner speaks, and then the “judge” sends the owner back into the lion’s den awaiting some 45 minutes for a verdict. The verdict is an average of $2000. in fines. There are hundreds of owners there per day. Do the math. $$$$

That’s the cost of doing business. This has become my favorite go to expression for unforeseeable, necessary expenses and costs that a business commands. The DOH paid me a visit in February. Fine, $2000. I fixed the violations. Then they paid me a visit in October and I received 17 points which amounts to a “B” rating (13 or less for an “A”). The Inspector said he was sending me another inspector in a couple of weeks. He stated that I had a potential for an “A” if I fixed certain violations. Four weeks later another inspector came in and fined me 21 points for completely different violations. She awarded me a “B” with a grade pending, meaning that another inspector will be paying me a visit in the next month as well.

In a follow-up note today, Mateo said that in 2017, the DOH is better at working with business owners rather than just using the system to generate income through excessive fines.

"On more than one occasion, inspectors were helpful to me in finding solutions to problems and were collaborative in education. As a result the business received fewer violations and more A ratings. The desired effect of my blog post, and the ensuing press made some impact (I believe) ... While it is still far from perfect, it has improved drastically since Mayor de Blasio has taken office."

He offered more insights about the East Village business environment in this blog post from February. It offers more insight into why it wasn't possible to stay in business.
Posted by Grieve at 4:20 AM

Email ThisBlogThis!Share to TwitterShare to FacebookShare to Pinterest
Labels: Pata Negra, restaurants that are now closed

Sounds fucking exhausting🤦🏼‍♂️ What a shame. I enjoyed this spot.

As shocking as all this sounds somehow I am not surprised that a city like ours see honest hard working people as a source of added income while huge tax breaks are handled out like Halloween candy to big developers. I have always heard that the restaurant business is one of the hardest to succeed in and this information along with landlord greed, helps explain why so many eateries are throwing the apron.

My family owns a small building which I live in and take care of and several years ago the city sent hoards of sanitation officers into our neighborhood to write fines for the smallest offense. I witness 3 officers examine one recycling bag for what had to be 5 minutes, they flipped it to one side then the other until they found a tiny Advil bottle which should not have been in there and then produce a fine for $25. Sanitation no longer sends their ticket writing troops on our block and now I know why, $25 fines are peanuts compared to $2000 fines you can get from just about any restaurant in the city.

Having worked at DOHMH, investigated disease outbreaks, and participated in restaurant inspections, I wish folks could see an average NYC restaurant kitchen before complaining about enforcement & eating up all restaurant managers' claims. I make no statements on whether the fine amounts are fair or not, and whether restaurant managers are right to be outraged by the court conditions (my sympathies here first go to the many other people that get swept up in the system and are treated absolutely horribly). But as for actual conditions in which food is often made... If people think restaurant kitchens are all clean and sanitary, I have a bridge to sell you.

Anon 8:47am: DOHMH restaurant inspectors and sanitation folks who go through recycling bags are completely separate; it's not like the city retrains the latter to go after restaurants to make more money. Jeez.

You run a food service business. It's a big responsibility. You are feeding people. If you don't keep high standards, you could make people sick. What's so hard to do about that?

The restaurant owners I know in the neighborhood all get A grades because they keep up with the safety standards they are required to meet because they know it is their job to do so. You run a restaurant. It's your business. You can't keep it clean? You can't properly store food? What else are you so busy doing?

If you want to complain about high rents, we get that. It's hard to run a small business here because of that. But don't complain about being required not to give your patrons food poisoning.

I liked this restaurant, they had a menu I've not found anything similar to in NYC, and I will miss eating there. Always loved that little mosaic. Adios, y buena suerte, señor.

Ohh yeah like people were getting sick right and left before this grade system existed! bunch of crap if you asked me its all about making $$$$ for the city . its plain and simple.

@9:50am: A few years ago, I was seated in one of my favorite E. Village restaurants (now gone) when the DOH inspector walked in to do a full inspection RIGHT AT THE START OF DINNER SERVICE (6pm). The owner was (as you can imagine) not happy, esp. as the first thing they told him was that his wood-burning oven (which had been there for over a decade) was "not okay" - so he had to go around to all the tables and tell the seated diners that we couldn't order anything that required the wood-burning oven.

This restaurant always passed its inspections & had an "A" - but having watched the DOH inspector barge in at that particular time of day, it was hard NOT to conclude that the city & DOH were looking for, perhaps, some baksheesh. There was no reasonable explanation for what I saw happen.

This is not about food poisoning. This is about cowardly politicians who instead raising taxes find ways to raise money on the backs of small business people. It's a just a revenue stream for the city,
Parking tickets aren't given to to help traffic flow or street cleaning, It's just dione to raise money for the city.