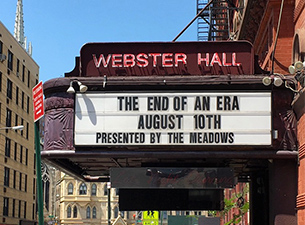 Webster Hall this morning announced the headliner for its last night in business on Thursday — the Queens-based rapper Action Bronson...

As previously reported, Brooklyn Sports and Entertainment, along with AEG-backed The Bowery Presents, teamed up to buy the building for $35 million.

After Thursday night, the landmarked building on 11th Street between Third Avenue and Fourth Avenue will be closed for an undisclosed period of time (likely between 18 to 24 months) for renovations and conversion to a music-only venue. (There will no longer be any club nights here, per various reports.)

In closing out the current iteration of Webster Hall, management booked surprise shows with Nine Inch Nails on July 31 and, for the last club night this past Saturday, Skrillex...

We can't even put a caption to the legendary nature of this photo @Skrillex - 📸 @dailyeyes pic.twitter.com/LymAHyTXxR

The Ballinger family has owned and operated Webster Hall since 1989.

I was there to say goodbye. Haven't been there since the early aughts.

It was more like EDF. And I was overdressed, suit without the tie, as if I were clubbing back in the '90s. Felt out of place and stuck in a time warp. Almost evryone else was just wearing shorts, tank tops, or t-shirts.

And no one was dancing, almost everyone was just watching the DJ bobbing their head up and down, side to side, as if in a concert, waitung for the drop. Times surely have changed.

"Skrillex is a untalented suckfuck."

Who are those people surrounding him, are those supposed to be roadies?

Let AEG take over to continue the genocide of real good music.

@2:19PM. The downfall of the club scene began when Peter Gatien, who also owned the Tunnel and Limelight, bought the Palladium. The last time I went there the music sucked, there were a bunch of kids sitting in the balcony doing drugs, and no one was dancing. On the way out so saw Peter standing at the door and told him he was running a drug den and had ruined the Palladium. He just blinked at me with his one eye and shrugged. Shortly thereafter the Feds started raiding his clubs for drugs after kids started passing out and dumped in the street from overdosing He was convicted of tax evasion and deported back to Canada. Good riddance. Webster Hall was never a drug den but it just became too grungy over the years. What ever happened to people wearing nice clothes when they go out clubbing? Now everyone looks like they're going to the gym or the laundromat, even at the airport. It's unbelievable.

The problem with clubs, Giovanni, is they don't have dress codes.

If I ran a nightclub, real simple for the dance/dj nights:

Women can wear anything but will not look like they're at home, the gym, or the laundromat.

Giovanni: I see what you're driving at, but given the state of air travel in this country who the hell wants to sit on a tarmac for 3 hours waiting for their plane take off all dressed up?

But there were some holdouts with clubbing up to the late '90s. There were clubs such as Peace, which is now a CVS on Bleecker St. And I remember when Webster Hall would have swing night during weeknights. I recently visited the now mall in Limelight. Sad and depressing to see what it has become. And nowadays, the only ones who can enjoy clubbing is if you pullled up at Le Bain in an Aston Martin with 2 blondes, a brunette, and a redhead and order bottle service. It has become exclusive, where back then, all types -- yuppies, goths, misfits, grunge,... mingled and danced together and were welcome with no judgment.

I can caption that photo very easily: This is a bunch of fools who were easily parted from their $$, squashed together so they can barely move, losing their hearing, and convinced they're having "fun" (no matter how hard they may have to try to make that happen).

@12:39 I agree you want to wear comfy clothes, but there's a difference between. nice casual and slovenly. Some people are traveling in flip flops and pajamas these days. Sorry but Garanimals and Sesame Street PJs are not in the nice casual category. People go to Broadway shows in sneakers and jeans wearing an I ❤️ NY t-shirt. I saw the Michale Moore show last week and it was a slob fest. Did everyone throw away their nice casual clothes? What do they wear to weddings and funerals, cut offs and tank tops? I was all in favor of the transition to casual clothes, but there is a way to do it right and it's gone too far.

I lived across the street on and off from 1978-2003. What a lot of people don't remember was that it was a Spanish dance hall called the Casa Galicia before it bacame the Ritz and then Webster Hall. People used to line up in their elaborate Spanish dancing outfits and go dancing there. I saw U2 there in the 80's. Lots of memories- hanging w the carpenters during the renovation etc.

Again, Giovanni, dress codes need to be established. Don't get on the people who dress like they do when they're allowed to dress however they want.

I'm not really even talking to you since you ignored my post for some reason, I'm just saying to everyone here: dress like a slob, you're okay since the place is okay with it. It starts from the top. I don't fault people for wearing gym clothes at a nightclub cuz the club lets it happen. Let it happen and you get slobs. Don't let it happen and you don't get slobs. You are the people you draw.

@ 11:15 wow, did not know that about the spanish club! cool! i remember walking to school early in the morning in the late 80s and seeing a couple, clad entirely in acid-washed denim, slow-dancing on the front steps in the sunrise: the marquee still read "white lion." good times! hope many have good times there in future!

I can't even begin to count the shows I saw there in the 80's when it was the RITZ!!! Good times!!

The nightclub part isn't what it was but it's a sign of now. The concert end has been much better after Bowery Presents stop booking the concerts there. Shame they'll be booking it again with their lack of diversity and fake indie image. I hope they at least employ some of the current staff.