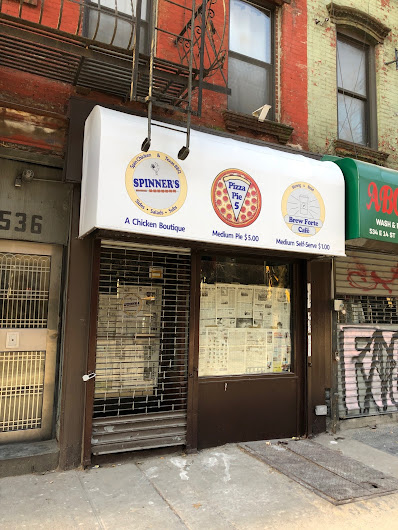 Spinner's short tenure at 536 E. 14th St. between Avenue A and Avenue B has apparently come to an end. The quick-serve restaurant has not been open lately, and newspaper now covers the front door and window. Google lists Spinner's as permanently closed.

Spinner's, billed as a chicken boutique, opened this past Aug. 23. Two months in, they closed for a quickie revamp, and added pizza to their arsenal.

EVG commenter MrNiceGuy had this to say on our October post:

I'm rooting for this place, but it seems like they've got an uphill battle — the foot traffic on that part of 14th St isn't great, and L-train construction is non-stop across the street. But I've met the owner, he's a really nice guy and his chicken is great. If you live in the neighborhood, give them a shot! Adding pizza to the menu seems like a last-minute Hail Mary. Good luck Spinner's!

Previously on EV Grieve:
Spinner's bringing chicken and Texas BBQ to 14th Street
Posted by Grieve at 4:00 AM

sorry to hear this