A Repeat Performance, until July 31 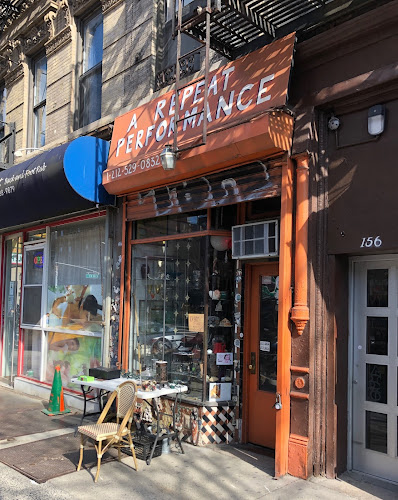 [EVG photo; all other shots by Daniel Efram]

Photos and text by Daniel Efram

The wonderful East Village bric-a-brac store, A Repeat Performance on First Avenue between Ninth Street and 10th Street, will be closing on July 31 after 39 years in business.

In our ever-changing neighborhood, during an era of constant discussion surrounding the influx of short-lived businesses and the disappearance of some seminal mainstays, it is time for yet another of the latter to make its way into our memories and off of the streets.

A Repeat Performance has been a gem of a shop for quite some time. With its eclectic collections of old-school cigarette lighters, books, film slides, glassware, and recently even an old hand-cranked washing machine, it has provided me with never-ending escapism for my years in the vicinity. 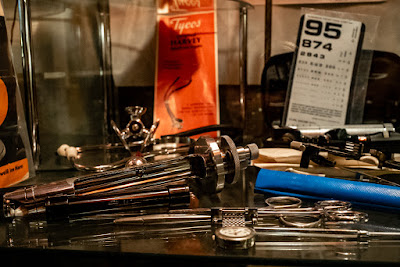 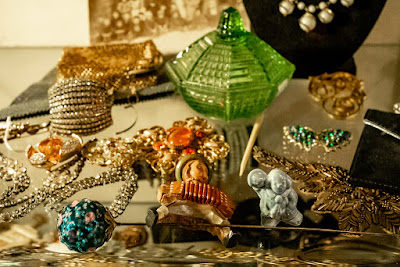 The shop holds more significance than simply a reminder of what the neighborhood used to mean. A Repeat Performance has been perhaps the longest-running museum of the non-essential in my daily walk. Need an accordion, a slide viewer or some opera glasses? You may find them here.

It's a reminder of our family attics and basements, and the stuff we may have had to get rid of for lack of space, but still admire for the quality. This store is a reminder of days gone by, when artists could survive selling a uniquely artful selection of ephemera and maybe even meet a friend.

Beverly Bronson opened the store in 1980. Sharon Jane Smith arrived from the theater world in 1987 and hasn’t left. 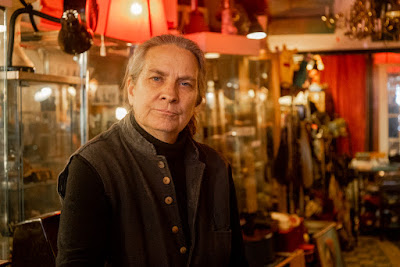 “Since May 4 of 1987, I have worked with Beverly Bronson at A Repeat Performance. Now that Beverly has left this world I have to face the fact that I am not the businesswoman she was. It’s time for me to complete my stories of New Yorkers who stopped into the shop," Smith told me earlier this month.

Most recently Sharon showed me some beautifully shaped rocks that were being sold. These rocks were beautiful and looked like they were naturally carved, from a running stream in the Catskills, perhaps. She told me that the Knoephelmachers — Margaret and Joseph, a local couple — were stone collectors. These beauties came from the Sahara desert. Sharon has helped to find new homes for many. Sharon also mentioned her love for making tiling and mosaics, which is exemplified by the work she has done on the front door frame (see photo). 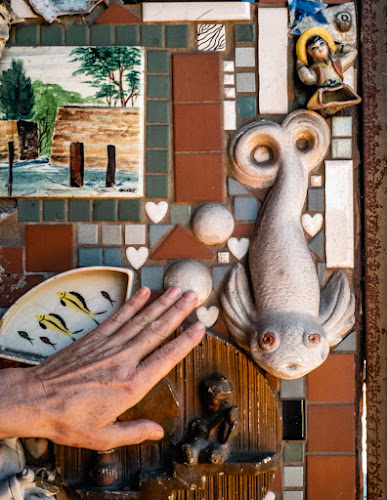 Go in and say hi to Sharon before July 31 and ask about the book she’s writing. You may walk out with a sweet stethoscope or typewriter. 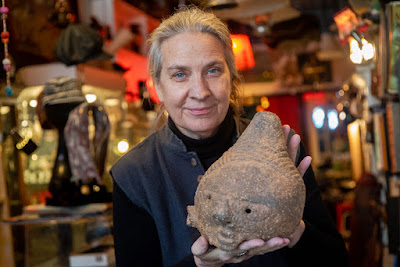 Previously on EV Grieve:
Out and About in the East Village with Sharon Jane Smith
Posted by Grieve at 4:30 AM

so many treasures bought there over many years... the heart of the east village is a faint slow beat at this point, soon nothing but bro bars, woohoo girls drunk brunch spots and chain stores

I always liked browsing (and buying) their old shortwave radios, stereos, clocks, rotary phones, typewriters, record players, records and other remnants old technology that seem so quaint and comforting today. One day, when the history of whether the Analog or the Digital Age was superior in terms of providing humans with a sense of happiness, fulfillment and mental health, I’m pretty sure the Analog Age will be the winner.

Giovanni is right, old technology brought us more relaxation and enjoyment than the nerve-wracking smart phone alerts and constant intrusion of social media and daily onlne culture wars. I just read that for the past couple of years, vinyl and CDs have been outselling digital music downloads, although total music sales are still just half of what they were 20 years ago. I’ll definitely have to stop by this favorite old store to pick up a piece of the past before it’s all gone.

Very sad. My latest purchase from here is a beautiful green-glass necklace, a treasure.
I hate to say it, but it feels like Anon 11:49 is correct, "the heart of the east village is a faint slow beat at this point"...
So many businesses with soul close their doors. What comes next, if anything (!), lacks soul more often than not.

Well worth mentioning that the founder of this store, Bev Bronson used the profits to support a nonprofit she founded in Nepal. "House with Heart (formerly Ghar Sita Mutu) is a charity that provides a home for abandoned children, an education center for impoverished women and children, and an outreach program for needy families in Kathmandu, Nepal.

This non-profit NGO (Non-Governmental Organization) was founded by Beverly Bronson in 2001, when she found two children, Krishna and Babu aged five and two, huddled in front of a tin hut after being abandoned by their mother.

Since that time, House with Heart (HwH) has built a facility that houses the children’s home and education center, and continues to expand its outreach every year. Construction of a new second house is nearly completed. The board of directors is now overseeing all House with Heart operations, and continuing the work of beloved Founder Beverly Bronson, who passed away in May of 2018.
http://www.housewithheart.org/

Memory may be fuzzy, but I seem to recall a Jamaican woman had a used clothing/tailor shop in this spot in the early to mid 80s.

Yes the woman was Haitian, not Jamaican. You used to drop off clothes here and she would either repair them for you or she would repair them and donate them to Haiti. The space has always been a place of connecting and supporting the global economy in some way. Volunteering for Beverly’s orphanage Ghar sita Mutu isn’t precisely how I met the team at A Repeat Performace over a decade ago. In 2008 Beverly and Sharon Jane offered me the store next to this one so that Bev could spend more time in Nepal with the children. This was an opportunity of a lifetime, to make a living as a sculptor of little objects in my favorite neighborhood in NYC was an absolute dream. We had a jewelry shop next to this place for almost 4 years until I decided to NoLIta, which was probably my biggest regret in life. These East Village landlords are probably the best old school New York landlords that one could ever imagine. If it weren’t for then I would have gone out of business just as quickly as I came in, since 2008 was a very tough year and one of the worst financial crisis of my time. They are good souls, just like Bev and Sharon Jane - and are doing all they can to keep artisans in the neighborhood. The landlords offered me this space and so I’ll be helping long time friend Sharon Jane transition into her new life. I will forever be grateful for the opportunity these two fabulous women gave me back in 2008, and am so happy to be returning to this warm community of which I consider Home.