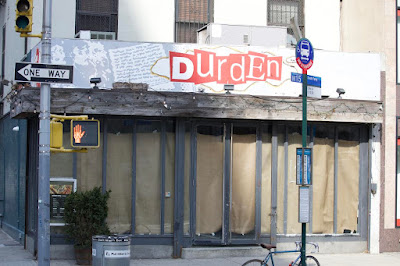 It was closed for St. Paddys...
Durden is dead

As all Fight Club fans know, the first rule of Durdening is don’t talk about Durden. Let’s hope the next theme bar has a theme that’s actually relevant to this neighborhood, as opposed to a Harry Potter themed-bar or Beetlejuice. How about, The Crusty? Or maybe The Bike Lane. Or, The L Train Shutdown. Unfortunatley, the most relevant theme these days would be something like, Bros & Sons, or maybe The Sauage Factory. Anyway, at least there;s one less place for SantaConners to pass out in now,

I remember a guy assuming, it was Curt in my building a few months back, asking for signatures to open/reopen this bar with a food license.