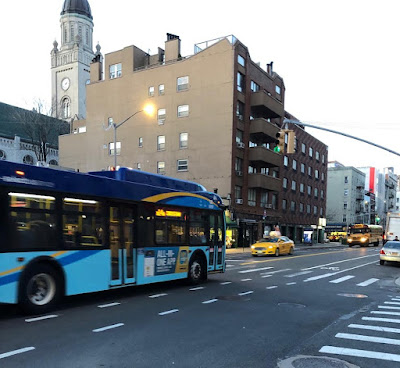 There's a town hall with MTA officials this coming Tuesday night from 6-8 (details below) to discuss proposed changes to the M14A and M14D bus routes on Avenue A and Avenue D.

As previously reported, with the the new planned SBS route, the MTA may eliminate M14A and M14D stops throughout the East Village and Lower East Side.

The proposal would turn the M14A and M14D into an SBS route, lowering the number of stops on Avenue A and Avenue D and along Grand Street.

Last Friday, local elected officials spoke out against these proposed moves during a rally on Avenue A and Fourth Street. (You can read coverage of this at Curbed and Patch.)

With the partial shutdown of the L train fast approaching, this compromise SBS route would eliminate a number of local stops near senior centers and NYCHA developments, while not removing enough stops to provide significantly improved speeds.

A real M14 SBS with supplemental, local service, would service vulnerable populations while improving on the proposed SBS plan and providing real “express” travel times that other routes have. In fact, there is already a successful model for this kind of plan just a few avenues away, where the M15 SBS runs parallel to an M15 local route. The MTA must pursue a similar strategy for the M14 route.

The Lower East Side, which encompasses most of the future M14 SBS route, is home to one of the 10 largest senior populations in New York City who rely on the current M14A/D to get to medical appointments, supermarkets, and social activities. The current proposal also ignores the challenges that stop removal will pose for residents living in NYCHA developments and the 28 percent of residents of the Lower East Side and Chinatown who live below the Federal Poverty Level.

"Our M14 bus is the second-busiest bus route in Manhattan and sadly also the second slowest: I believe we must and can do better in serving our East Side residents," said City Councilmember Carlina Rivera. "We need solutions for both those who need faster transit options and those will be forced to walk over half a mile between the proposed new bus stops and their homes, with no other affordable options. The current M14 SBS plan not only fails seniors and low-income New Yorkers – it also diminishes how transformative an SBS route could be for the area."


Tuesday night's meeting is at the 7th Precinct, 19 Pitt St., which is just south of the Williamsburg Bridge and Delancey Street. 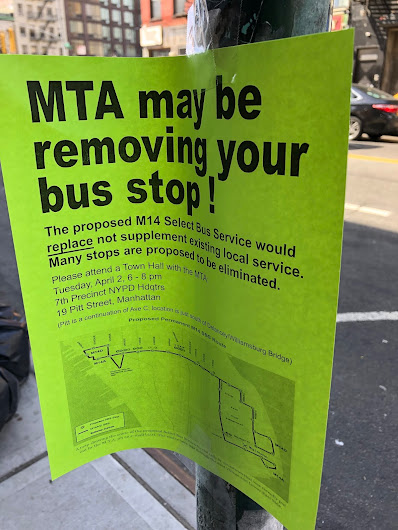 Previously on EV Grieve:
Local elected officials urging the MTA/DOT to keep local service in M14 SBS plan
Posted by Grieve at 4:22 AM

I'm not sure the 1st Avenue buses are successful. You have to choose between a local and an SBS before you board. If you want to take the first bus that comes, no matter what it is, you can't.

This is such BS!!! NYC does not like poor people. They want us to pay even more for the inanely titled, "Select" bus. MTA will do anything to find an extra dollar.

It's the same price. Doesn't anyone fact check here?

The SBS may speed up longer trips by skipping some stops which were previously serviced by the much more convenient and fast Limited busses, but the MTA really needs to measure how much wasted time they are costing commuters by making them walk all those extra blocks. It is also much more inconvenient it is to have to walk several extra blocks when a stop is moved or eliminated.

The SBS skips the East Village on both 1st and 2nd Avenues, going from Houston to 14th Street without stopping at St. Marks Place. Meanwhile, if you are unlucky enough to be standing at a local stop you are forced to either watch one SBS after another pass you by, or else you are forced to walk as many as 7 blocks to get to an SBS stop, all while you risk missing a local bus which will blow by an empty bus stop. It’s no wonder ridership is down when they make riding so harder to do.

I think I just found a reason to get a car.

Why can't they have both local and SBS buses?