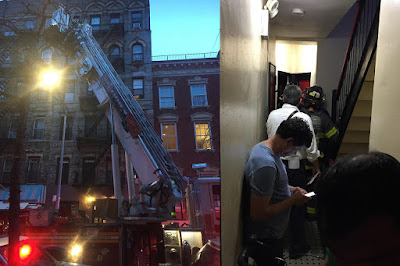 On Monday night, there was a report of a fire in an apartment at 70 E. Seventh St. between First Avenue and Second Avenue. Thankfully the damage was minimal, though the tenant had to temporarily relocate.

This incident prompted a building resident to share this public service announcement:

If you were home, it was scary. Smoke. Flames. Lots of firefighters.

There is only one fire extinguisher (by the trash) for the entire building, which is basically all wood construction with a brick shell. One kitchen accident, faulty appliance, overloaded outlet or untended candle – and it all goes.

Even if the fire is small, smoke and water damage would make at least half or all of the building inhabitable. Bye-bye apartment.

Picture coming home to everything gone or evacuating in minutes (like those of us who were home thought we might have to Monday night) and not being permitted to return, and you know it’s time to — get a fire extinguisher for your apartment!

Residents believe a faulty hot plate was the culprit for the fire scare, which led the resident to offer another tip: Check outlets, stove and unplug appliances — like hot plates — not is use.
Posted by Grieve at 4:03 AM

Thanks for the reminder. My fire extinguisher is covered in five years worth of dust, a fire hazard itself I’m sure.

Excellent advice about the fire extinguisher.

I would only add: You have to remember to check it once a month or so, to see if it's still properly CHARGED so it'll work if you need to use it.

But it's money well-spent, and likely to save some people from losing their homes & possessions.

BTW, the home you save may be not just your own: last summer there was a hot-plate fire in the building immediately next to ours, and we were very lucky that the fire did not extend into our building via the cockloft.

The FDNY told us it could have (and thank heaven it didn't) caused a fire HERE that would very likely have left our entire building uninhabitable. And most people are *NOT* insured against that.