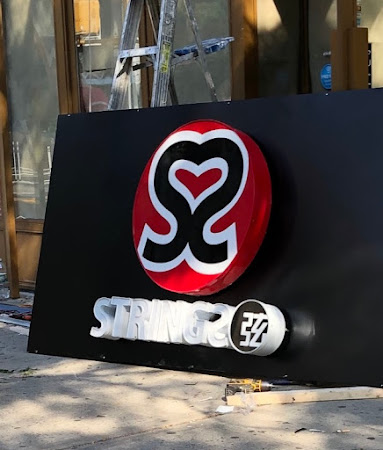 As noted last month, Strings Ramen was prepping to be the next tenant for 188 Second Ave.

And yesterday, the Strings signage arrived on the scene here at 12th Street.

According to materials at the CB3 website, the proprietors were previously involved with the now-closed Lotus Blue Dongtian Kitchen and Bar on Union Square West. The liquor license application didn't mention any connection to Strings Ramen, a regular on the best-of ramen lists in its home turf of Chicago and the United States.

The logo that arrived at No. 188 is the same as the logo of the expanding Chicago-based shop

The restaurants at 188 Second Ave. haven't fared well in recent years. Lumos Kitchen lasted three months in 2018. Others to make quick departures in the past four years were Hot Pot Central, DumplingGuo and Dumpling Go.

I was hoping for a Starbucks so I could administer another beatdown. Maybe next year :-/