John Giorno, the poet, performance artist and LGBTQ+ activist, died on Friday. He was 82. A cause of death was not immediately disclosed.

Giorno was one of those extremely rare figures who would have had an admired career, and earned a place in the canon, even if he had only pursued one of his myriad interests. He wrote gloriously explicit poetry in the 1960s that foregrounded his homosexuality, gave frenetic performances around the world, painted bewitching text paintings, organized efforts to care for colleagues battling HIV/AIDS, and was an early convert in the United States to Tibetan Buddhism and meditation.

The central project of Giorno’s life was dramatically expanding the boundaries of poetry, and — at least equally as important for him — revolutionizing the methods by which it could be presented and distributed.


For the past 53 years, Giorno lived at 222 Bowery — aka the Bunker. (The palazzo-style structure was also the home of New York's first YMCA in 1884.) Last month, his multiple lofts in the building were featured in Architectural Digest:

American abstract painter John Opper was the first artist to set up a studio in the building, attracted to the abundance of natural light, open space, and cheap rent. He was soon followed by Mark Rothko, James Brooks, and Wynn Chamberlain. Over the following years, countless creatives and titans of the downtown scene would pass through the space; it's on the building's top floor where Andy Warhol screened one of his seminal films, "Sleep," featuring Giorno fast asleep for five hours...

In early 2018, Giorno created these posters with the line "You’re walking down 2nd Avenue, coming to St. Mark’s Place" ... which were adorned on the plywood on Second Avenue and St. Mark's Place during renovations for the incoming Swiss Institute... 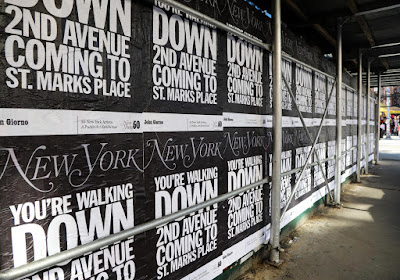 There were plenty of tributes to Giorno on social media...

It is with great sadness that we learned the passing of artist and poet #JohnGiorno. We had the honor to present his work in 2015, with the restrospective set up by his husband UGO RONDINONE : I ❤️ JOHN GIORNO
He will be missed#IloveJohnGiorno pic.twitter.com/AM2K6FheXJ

I believe William Burroughs occupied the basement unit. That must have been one heck of a trippy place back in the day.

I really admired his tireless advocacy for the LGBTQ + community and especially those living with HIV and AIDS. He was a dear person with a huge heart. If only more people could be as kind as him. RIP sweet man.

The funeral for this extraordinary man was held this morning at the Frank Campbell Funeral Home on Madison Avenue and 81st Street. I am sure the Tibetan Buddhist community will be having ceremonies to honor his life. I first met him through friends who were in Warhol films in the 1960s. My own life feels a little emptier now that he has gone.