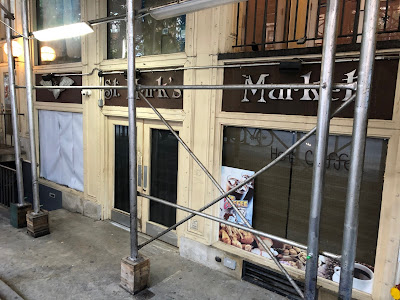 St. Mark's Market has officially closed at 19-23 St. Mark's Place. An EVG reader said they wrapped up this past Thursday evening.

As made known last Monday, the grocery between Second Avenue and Third Avenue was having a buy-one, get-one-free deal to thin out its stock.

We heard a variety of reasons for the closure (nothing related to rent, however). One worker blamed the sidewalk bridge that has been out front for the past two-plus years as a cause for business to drop off. (And as one commenter noted: "The dope fiend brigade hanging out under the scaffolding didn't help matters.")

Several EVG readers mentioned that the store changed ownership several years ago, and the quality of the produce and other offerings diminished — especially in the face of newer competition such as the Westside Market on Third Avenue at 12th Street.

There were anecdotes that Daniel Craig was a semi-regular here while renting the place upstairs. One reader claimed he once cut in line and used an Amex Black Card for a small purchase.

I do recall the place seeming pretty upmarket when it opened in 2003 in the now-mall-like building that replaced layers of history at the address that included the Dom, the Exploding Plastic Inevitable (featuring the Velvet Underground as the house band) and the Electric Circus. 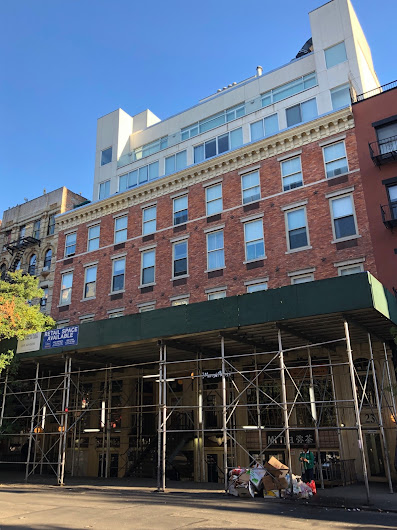 Prediction: The landlord will chop up the former market into several smaller retail spaces to make renting possibly easier.
Posted by Grieve at 4:30 AM

Speaking of scaffolding, I think that one has been up longer than two years.
There are other scaffolding arrangements that have been up even longer. Construction companies used to have to put permits on them that had expiration dates. Did they pay off De Lousy-io to make that law go under?
These things cause blightsville. At least the one on 2nd Ave. near 3rd Street finally came down a while back.

The night that I was there the guy behind the register said they had complained repeatedly to the city, and that the owner of the scaffolding and the building owner were issued a series of tickets, none of which, obviously, had the slightest effect. But of course there is no legal recourse to get the thing actually removed, because money rules.

Too bad. I frequented this store often. But there was a change a few years back and the outside scaffolding and the residual detrius made this place look like a place to avoid...unfortunately because nothing was further from the truth. Sad to see them go.

Service started to go downhill too. Purchase a a baguette and the cashier asked, aggressively, if he could break it in half, before I get to say ,he then proceeded, again aggressive by slamming the baguette on the edge of the cashier post, to which I say why would you want to do that, and just walked away. But they are nice to the young NYU students. I should've body slammed him instead.

I stopped there fairly often when they had good bread from Balthazar. Not much reason to keep stopping by after they stopped carrying it. I’m sure the scaffolding kept a lot more people away, though.

Macho Man, I saw something like that happen in an Associated way uptown once and it was so strange. Guy ahead of me bought a long, squishy baguette and the guy bagging groceries asked if he wanted it “folded.” The guy said yes and the bagger folded it in half and crammed it in the bag!