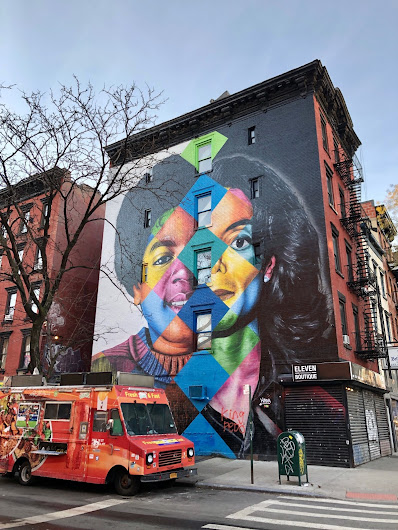 Someone wrote "King Pedo" on the King of Pop mural ... 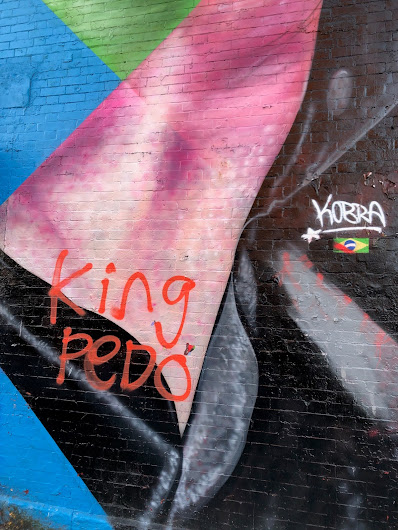 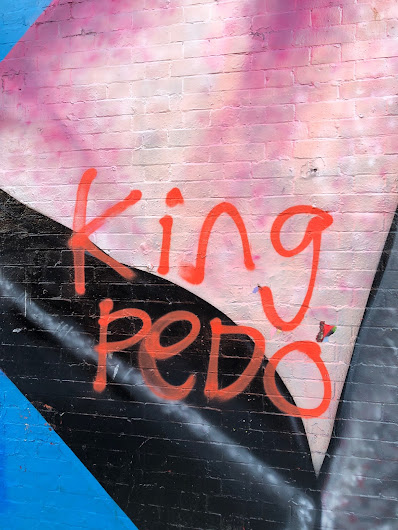 Back in March, Eduardo Kobra, the prolific Brazilian artist who created the two Michaels mural in July 2018, said that he had no plans to remove the work in light of the new allegations of pedophilia.

Before and even after his death in 2009, Jackson was the subject of multiple sexual abuse accusations and police investigations as well as civil and criminal lawsuits. His estate continues to deny all allegations.

An EVG reader who spotted the "King Pedo" message was surprised that the mural hadn't been defaced before.

Previously on EV Grieve:
Report: No plans to remove the Michael Jackson mural from the wall on 11th Street

On the wall: Mural of Michael Jackson, as a child and an adult, in progress on 11th Street
Posted by Grieve at 4:15 AM

Not necessarily in support of vandalism generally but it did seem at the time this went up that it was from some random artist putting up a random portrait in an inappropriate place (across from a house of worship) for random reasons. I'll leave this to local artists but don't we have enough local artists who'd be willing to make art for us that has local relevance?

I've never really understood this mural to be honest, I mean it's fine from an artistic standpoint I guess, but why the subject matter? MJ had no cultural ties to the neighborhood, or even the city as a whole, as far as I know. There's so many more appropriate people that the artist could have chosen...and what about survivors of sexual abuse having to see that damn thing everyday...I think it's in poor taste to leave it up, considering all that we know about the man. I only hope it becomes a canvas for more local street artists.

As much as I loved Michael Jackson’s music as a kid, there is no question his behavior was beyond being socially unacceptable, and was probably illegal. As others have said this mural makes no sense in this neighborhood. It would be more at home on Rodeo Drive, where MJ liked to squander his millions while keeping children hidden away in local hotels and condos. The local taggers usually destroy the Houston Street murals the minute they go up, but for some reason have left this one mostly untouched.

I looked up the artist Kobra and he has done murals sponsored by big corporations, including Coca-Cola, Nestle, Ford etc. I would guess this mural was sponsored by Jackson's record label Sony or some other aligned corporate entity, in an attempt to sell music, bolster Jackson's "street cred", reform his reputation, etc.

really don't appreciate the racism in these comments. no proof of abuse by MJ the KING of POP and to this day he still inspires POC to success. you all should be ashamed

Race has nothing to do with it, creepy is creepy.

I feel for the sexual abuse survivors who have to pass by this mural every day. It goes to show how the rich and powerful abusers will continue to be feted. If Kobra was an artist who cared about anything beyond a paycheck, he would replace this mural with an image of someone more deserving. I have long wondered about how Rum DMC feels about the Mural this artist painted of them on the side of Jared Kushner’s building on 12th and A. Did he get their permission? I would love to see art created by people who care about the neighborhood.

Oh please, there's no racism in these comments, and you have no idea what the race of anyone posting here is. It doesn't matter if Michael Jackson was a lily white albino -- which he practically was -- a pedophile is a pedophile. Just look at all the pictures with MJ cuddling and holding hands with young children, then listen to their testimony, and listen to MJ's own words when he admits he liked having young boys sleep in his bed. It's too bad when people will believe the lame denials of one person over the credible testimony of many.

Since the mural went up, I no longer walk down that part of 1st unless I have to, and have stopped using the first ave stop in favor of 3rd. There's nothing like the reminder of systemic child abuse to get you the hell out of the neighborhood.

And besides - Kobra is a good artist. Objectively. However, he has dozens of (random, misinformed, or just pandering) pieces around NYC. We have plenty of homegrown talent, esp local POC who deserve this representation and don't have corporate partners handing them prime artistic real estate. All around, this sucks, let's replace it with something relevant.

Could you specify which words in the above comments demonstrate "racism," please?

(From a Billboard magazine artical 10 years ago)

The FBI monitored Jackson for more than a decade, but the files contain no major revelations about his private life and the bureau apparently never developed any solid evidence against him.

Kobra is a hack. That stupid diamond pattern in all his murals bespeaks a paucity of imagination, and a total lack of understanding of New York City. Why is he given these commissions? They are nothing more than eyesores.

To be totally honest I can’t stand this guys murals and they’re everywhere. It reminds me of Urban Outfitters Art

"Urban Outfitters Art" *snort!* It sure does.

This would've been saner if it were done by Sane/Smith.

And this would fetch hundreds of thousands of dollars if duct taped a banana on it and presented in Art Basel Miami.

If we take down statues of Confederate leaders, or Christopher Columbus for political and philosophical correctness, then this mural should come down as well. Defacing it is just an expression of our Freedom of Speech. Let's face it...would you have let your child sleep over Michael Jackson's house knowing what we know now about him?

The world's smallest violin is playing the shortest sad song for all of the pedophile enablers who drag identity politics into every single possible conversation.

Does anyone know who the owner of this building is? I wonder how the people who live in the building feel about it and the principal and teachers of the school right there.