'Desperate Endeavors' leads to the Essex Card Shop on Avenue A 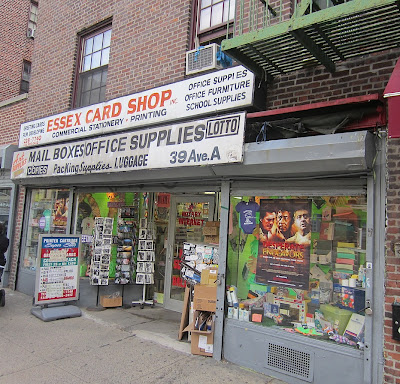 Essex Card Shop on Avenue A is arguably the best mom-and-pop shop in the neighborhood. And today, its owner, Jayant Patel, celebrates the theatrical release of a movie based on his life. Patel serves as the executive producer of "Desperate Endeavors," which is playing at the Quad Cinema on East 13th Street.

The movie is adapted from Patel's 1991 book, "Seeking Home: An Immigrant's Realization." A little about the plot:

Derived from a true story, the film "Desperate Endeavors" revolves around the misadventures of newly arrived immigrant Ram Patel to NYC in 1973. Attempting to extricate himself from a self-dug hole, 'Ram' encounters more obstacles than he can count, and ultimately finds a remedy to his numerous problems by encountering a spiritual adviser, legendary 'Dada Bhagwan' played by Bollywood star Gulshan Grover. Also stars Michael Madsen, Robert Clohessy, Ismail Bashey & Samrat Chakrabarti.

If you've been in the store at any time in recent weeks, then you likely received a flyer for the movie. Several readers told me about the movie... apparently this word-of-mouth is how the book ever got into the hands of a filmmaker — through a customer in the film business who heard about the book and passed it along...

I look forward to seeing the film... even though I may know how it ends...
Posted by Grieve at 6:54 AM

HAHAHAHAHHAHAHA "experience the movie that evreyone is talking about", "destined to become a classic", the sound effect of her throwing the rag, the acting, etc. etc.

I love those guys and Essex Card Shop but this shit is the lamest thing ever hahahahaha. Amazing.

Cool! I love this shop - best deals on socks!

I like them for their array of notebooks. They still sell good, old-fashioned reporter's notebooks there.

Only place in the nabe that sells hard-to-find, skinny composition books, too.

The prices for art supplies are outlandish, though.

that's excellent! i'll definitely support and check out the film. besides, who doesn't love an immigrant success story? especially when it's right in our neighborhood!

I'm still looking for an immigrant failure story...I bet they're in the majority. And I'm sure it's not because of a lack of hard work.

Yeah, I tried to love that shop but it's so damn expensive!

This is great, I'm very happy for the owner of this shop! I have been buying all of my printing supplies here since they opened.

Not to sound like a goody-goody, but I often would rather pay more to support a local business. So, this store instead of Staples. I also bought a new air conditioner at the Jewish mom 'n' pop place on lower Ave. A (where I bought another air-con about 12 years ago) instead of trying to save money by buying it at KMart or Best Buy. It may have cost double, but it's also a much better air conditioner than the junk they sell at chain stores.