The ABCs of Alphabet City today 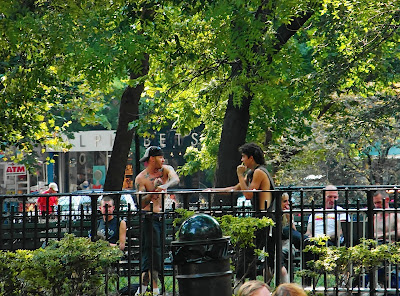 [Play-fighting in Tompkins Square the other day, by Bobby Williams]

East Village Week continues at The Wall Street Journal ... On Wednesday, there was the piece on the growing number of bars and all that. Today, there's a piece titled "Contrasts Grow as Alphabet City Evolves," focusing on Avenues A-D.

Alphabet City has capitalized. Recently, it has become the go-to neighborhood for franchise extensions from fancier parts of town — the West Village's Westville, Park Slope's Fonda and Chelsea's Upright Citizens Brigade Theatre — rendering it a kind of Epcot version of the city's coolness.

Perhaps the most telltale sign of the brighter days for Alphabet City came last year, when Tompkins Square Park, which for decades was a seedy, drug-addled tent city for the homeless, installed permanent ping-pong tables, a nod to the changing demographics swinging toward both affluent hipsters and young families.

And the quote of the day goes to!

"We're seeing a lot more young women come to the neighborhood, I'd say a 70/30 split," said Arik Lipshitz, president of DSA Realty, a local firm started by his father in 1986. New residents work in fashion, tech and media. "Not so much finance," he said. But also not just waiters and bartenders and that kind of thing. These are proper professionals now."

"when Tompkins Square Park...installed permanent ping-pong tables," yeah the park reached out and installed the ping pong tables all by itself. Isn't this anthropomorphism at its worse?

Makes you wanna throw up, buaohhhh!

"But also not just waiters and bartenders and that kind of thing. These are proper professionals now." Mr. Lipshitz sounds like a douche bag.

Christ! Is that why so many damn upscale nail salons keep opening in the neighborhood? I like my little inexpensive place instead of these sleek, overpriced factory line giant salons. There are only so many hands and feet in the neighborhood. More bookstores, cafes, healthy food places, please....

just what is a proper professional?
is that like an oxymoron?
and does it only apply to women?

Hey Ladies, get at me.

What a clueless journalist. There is only one ping-pong table in TSP and it's hardly a harbinger of anything. Photo caption of Nuyorican Poets Cafe says it's on "E. 12th Street." It's on East 3rd street, dummy.

And in typical WASPy constipated political correctness, the WSJ can't bring itself to use the word "Latino" despite Latinos being a huge part of Alphabet City. Fine Fare on Ave C, which is frequented by most of my Latino neighbors who live in Housing Projects--which are legion in Alphabet City--is shrugged off as a "discount supermarket." A Protestant way of saying, "Poor minorities shop here. Not for you, dear."

hey douchebag, congats on writing the most nauseating piece on the east village this week. way to suck

Glenn, any way you cut it, that Fine Fare sucks.

Today it's Avenue B is for Brunch, C is for cocktails.

Working on A and D.

EV Grieve gets 50% of the royalties of my contribution...simply forgot to credit him.

That was awful- how pretentious to think you have discovered a cool neighborhood and then remade it in your image bc before it was "drug addicts" and not "proper professionals" who play ping pong. What an ignorant douche. I hate these people- they see NYC and try to redecorate it bc they hate it- something about it scares them to see things that are gritty, or old, or have history or have uniqueness.

Complete schmuck! In business since 2007 ?!? Pathetic!

Arik dickshit, that what he is.

"New residents work in fashion, tech and media." Those are proper professionals? Self-enttled professions, that's what they are. Bunch of trust fund kids whose rents are subsidized by their parents, and the only reason they got into those industries is either because of their connections or their looks. And tech, yeah, bunch of "CEO"s who started- a "start-up" and get their salaries from the investors, naive, they think that they're getting paid just for being themselves not realizing that the investors need to to get paid. Can't wait for the next tech bubble and see these "proper professionals' go back to their parents house in Wisconsin with their tail between their legs. How do you like them proper professionals, Arik dickshitz.

FU Yunnies - you've got to be kidding me with trashing on the tech industry for having investors. Every industry in this entire city has investors - you think anyone could open a bar, store, or cafe without a huge amount of capital? No one can afford that without some help. Even the mom & pop stores that have been around for decades started with friends & family investments. Those that built from the ground up are extremely rare, and guess what - their original customers that purchased their items were the investors that allowed them to purchase the stores that they reside in today. They may not have gotten a monetary return, but they got easier access to the items they want. So, please get over it. Trash on the yunnies all you want, but don't make stupid arguments.

I came to the East Village decades ago to get away from "proper professionals". Is there no escape?

Tech start-ups: Pimple-faced college drop outs who have made unhealthy sums of money forming internet companies that create no concrete products, provide no viable services, and still manage to generate profits for all of its lazy day-trading son-of-a bitch shareholders.

way to go marty
thanks

Here's your proper professional, a twenty something trust funder who works as a sandwich shop girl while she tumblrs all day and her rent is subsidized by her parents. http://www.nytimes.com/2012/07/26/garden/emma-koenigs-so-called-redacted-life.html