EV Grieve Eatery Etc.: Updates on Bikinis, Graffiti and that kind of weird sushi place on the Bowery

Plywood is up where Friend House used to be on Third Avenue and East 13th Street... CB3 OK'd the application for this "full‐service American comfort food restaurant" (aka, bar) in June. One of the principals owns and operates two bar-restaurants in White Plains — the Brazen Fox and neighbor Ron Blacks. 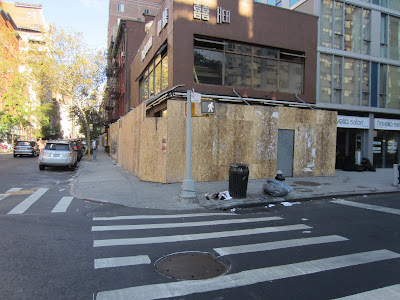 Workers have removed the iconic signage at Osaka Vibe Sushi, aka that kind of weird sushi place on the Bowery ... (the DANGER sign is gone too). A small plates place called Wisemen is in the works for the space. (BoweryBoogie has more about it here.) 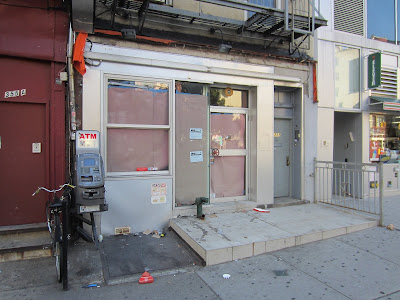 Workers have finally removed the Kate's Joint signage on Avenue B and East Fourth Street ... work continues on the incoming gourmet market... 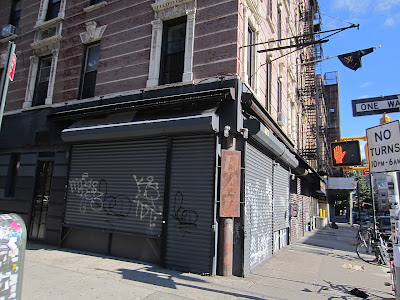 Several readers noted that Bikinis opened this past weekend at 56 Avenue C. We spoke with Petrit Pula, one of the principals for the Barcelona-style eatery, back in March. You can read that post here. 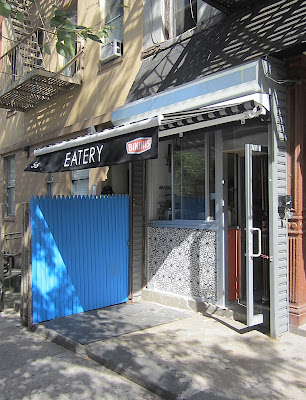 On East 10th Street, Graffiti, the acclaimed small-plates place from chef Jehangir Mehta, is expanding to the storefront to the east, as we first noted ... into the space last occupied by Atelier Muse ... and you can see that the former bridal boutique is looking like Graffiti ... 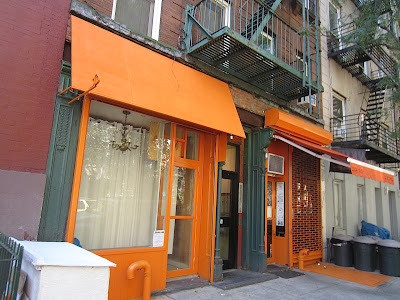 And on East Seventh Street, the folks at Gingersnap's Organic have removed the refrigerators with some of the to-go items... 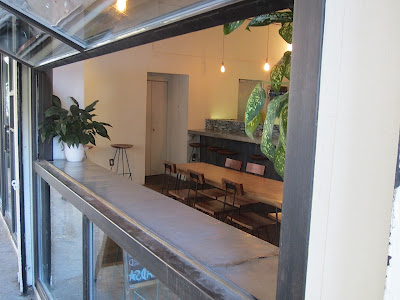 Via Facebook, they told us that they're adding a new smoothie bar, made-to-order juices and more cafe seating...

On that soon to be "full‐service American comfort food restaurant"...err...fratty bar on Third Avenue and East 13th Street:

much like The 13th Step, Aces and Eights, Billy's Hurricane, etc. , i.e. deep fry most food items in the menu and it's a "restaurant".

operators from White Plains ('nuff said). Go see the Yelp reviews and the website on The Brazen Fox (fried pickles for $7) and that's what this restaurant...errr... bar would be like.

CB3 had been fried pickled to issue that liquor license.

every establishment that goes in front of CB3 for a liquor license and deeming themselves to be a restaurant should wear this apron.

[and I know a dude will argue that what's the big deal with this restaurant...err...bar... since Nevada Smith's, Webster Hall, blah, blah, blah, are already in third avenue.]

ever been in Atlantic City on a Thur/Fri/Sat night? That's what the EV scene has become.

And there's another new place opening in between the White Plains joint and Nevada Smiths ... where the The New York Central Framing Annex was...

Ah, Feast. No I didn't know. But wouldn't be surprised if a joint, maybe where the Atlas Barber School used to be, named Yeast and Beast in the East, where the beverages -- wine, malt beverages, beer, cider, sake, will be made with, of course, flash yeast infusions tinctures -- and the food would be roasted beasts -- pig, duck, goat, goose -- would soon open. And the owner/manager's uniform would be this, the wait and floor staff uniforms would be this and this.

i was excited for gingersnap organics to open, but honestly it is superduper expensive. and for something to stickershock me (after living here for so long) it has to be pretty darn spendy. i hope maybe the juice bar and new additions make it a little more "useable" because as of now i've walked in and out of that place three separate times, but just can't bring myself to buy anything...

Great post & love the "graffiti" :) reminds me of a "graffiti artist" from London called "SER" who runs a "graffiti" company called www.graffitikings.co.uk go check him out.