Remembering LES Jewels on the anniversary of his death 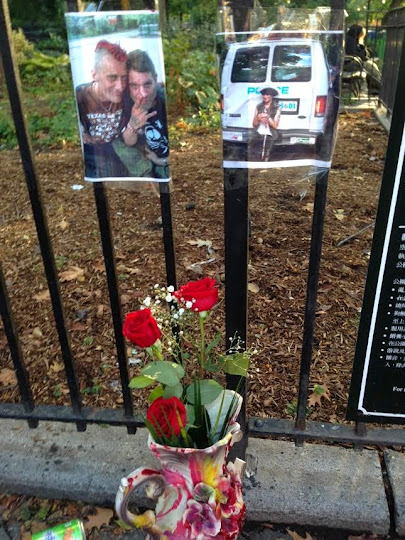 And there are at least two makeshift memorials dedicated to him — one at the entrance to Tompkins Square Park on East Seventh Street and Avenue A … and one in front of the former 7-Eleven on St. Mark's Place… 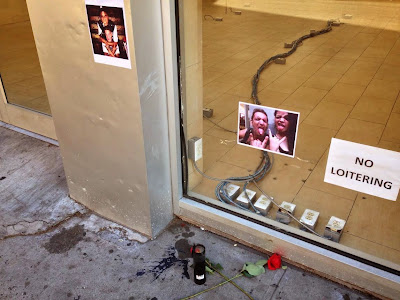 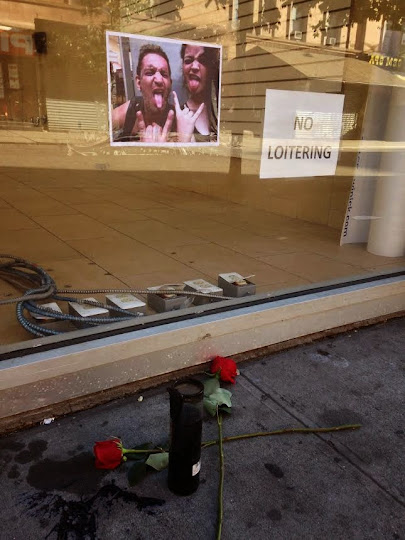 On the morning of Sept. 14, 2013, Jewels was found unconscious on Avenue A at East Ninth Street. He reportedly died a short time later at Beth Israel.

The medical examiner's office said his cause of death was "blunt injuries of head" … however, "the manner of death is undetermined."

Memorials for LES Jewels in the East Village
Posted by Grieve at 10:36 AM

Did anyone ever turn in that guy who bashed him on the head?

A toast to les Jewels all the yuppies on ave A your drink is safe ...

One of the people that kicked him and said she did was a woman. The cops declined to investigate because he may have been in more then one altercation that night. I miss him and when I returned to the LES recently I thought of him as I walked down Ave. A to Rays. His greeting when I visited was something that made me feel not everything was gone from the old days but since he is now gone too well thats it.. The future is unwritten but it really sucks there now more than ever.

I miss him too. I know very well the NJ town he was from, and he was my age. Like he could have been a friend of mine very easily. I know he could be very violent and it's not cool to drop your pants on Avenue A! But there was something very sweet about him. I wish he was able to overcome his addictions. His poetry was good. RIP Joel.

12:12 nice one remember when those fancy jug drinks met there doom rip jewels

RIP, brother Jewels - you are missed. Last I saw him was at the Tompkins Riot Reunion concerts. It was the day they took the photo of him with the cops in the background (probably not a unique photo description with regards to Jewels) - and that is just how I remember him - from that day with that smile. We had a little talk that day that sticks with me. Sad he had to die in the manner he did. I knew him as a sweet soul (but know of the other side). The place isn't the same without ya, brother....