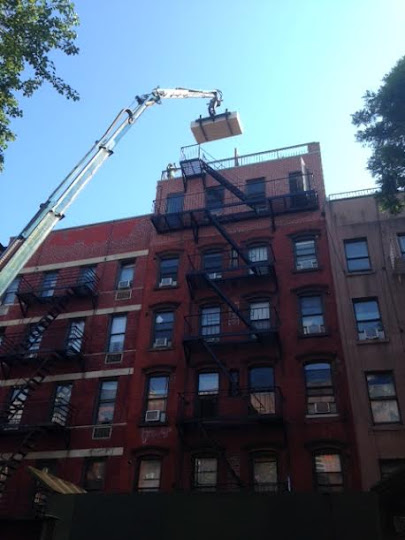 Last week an EVG reader noted the arrival of some supplies at 515 E. Fifth St., where landlord Ben Shaoul is under orders to remove the illegal penthouse here.

Per the reader: "Getting fresh sheetrock delivered isn't what happens when you are removing an illegal addition."

Since then, several 515 Penthouse Removal Watchers have observed workers actually removing materials from the top floor here between Avenue A and Avenue B and discarding them in the dumpster outside No. 515. 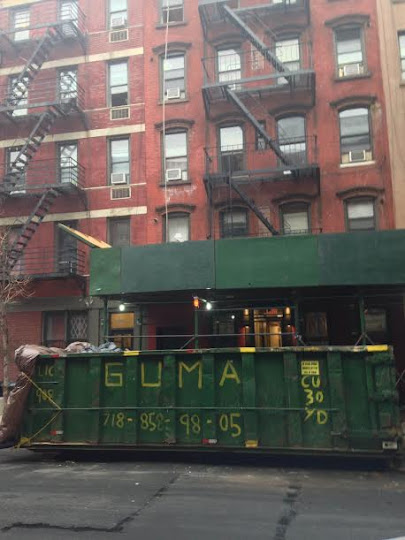 And a member of the 515 tenants association said that this was a shipment of plywood to cover the holes between the 6th and 7th floors made by the demolition.

As you may have memorized by now: The Board of Standards and Appeals (BSA) ruled in 2008 that Shaoul needed to remove the 6th and 7th floors here between Avenue A and Avenue B. However, his attorneys had requested that the city grant a zoning variance to "permit the constructed enlargement, minus the penthouse, to remain" here.

A rep for the tenants association told us that the BSA is giving Shaoul until the end of July to provide proof that the penthouse has been demolished … then the BSA will reopen hearings on the variances that Shaoul and Co. are requesting.

515 Penthouse Removal Watchers figure workers will just hollow out the penthouse and leave the bulkheads the way they did on the Shaoul-owned 514-516 Sixth St., where the space is now apparently making for a cool party gazebo.

"Getting fresh sheetrock delivered isn't what happens when you are removing an illegal addition." Clearly not a person who knows what's up.

But seriously folks, why didn't Ben Shaoul invite a bunch of bros to throw a rager in he penthouse? Place would have been demolished within hours.

Leaving the walls of the penthouse but removing the roof keeps the structure in place for future zoning changes. Meanwhile call the mixologist and the DJ, woo.

oh good
we need another rooftop party space
and with a gazebo no less
did they have time to put in the bathrooms?

The tenants should go up after hours and remove the walls. that'll teach him