As previously reported, the remaining rent-stabilized tenants at at 444 E. 13th St. filed a lawsuit against their landlord for deplorable conditions as well as for alleged threats and harassment.

One of the residents told us the other night that Goldmark Property Management hasn't bothered cleaning the building or taking out the trash in several weeks.

So the tenants have been tending to these duties themselves... 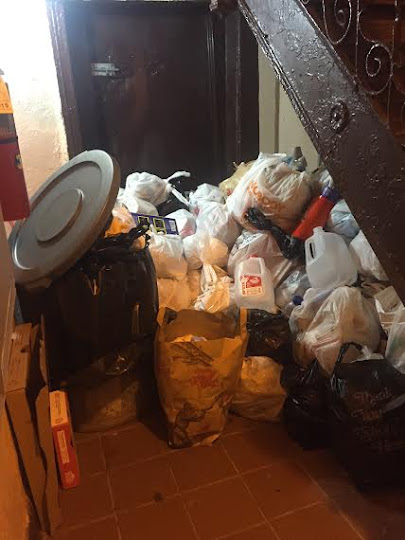 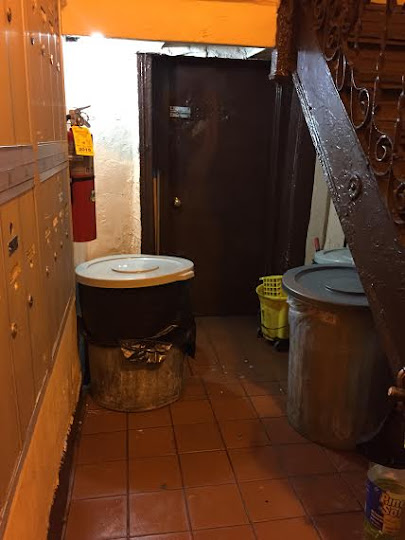 Among other issues, the building's heat, hot water and cooking gas have been off since April. Tenants also said at a May 28 press conference outside the building between Avenue A and First Avenue that they've had to endure "racist taunts and threats to call immigration from the landlord's aggressive agents," per a report in the Daily News.

A resident in attendance at yesterday's preliminary court hearing shared a few details, such as the judge ordered a temporary injunction against the management's reps from speaking with tenants as well as issued a stop work order for all construction that isn't related to getting the gas restored or repairing other violations.

According to the Department of Housing Preservation and Development website, there are currently 85 open violations in the building, per DNAinfo.

Previously on EV Grieve:
Claim: Landlord of 444 E. 13th St. threatened 'to drop dynamite on the building'
Posted by Grieve at 4:40 AM