East Village Radio is officially back 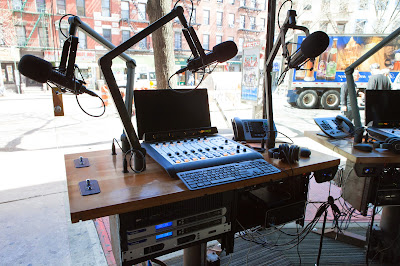 [Photo from April by James Maher]

After a few months of prep work and testing, East Village is now officially back on the Internet waves… Yesterday, Dash Radio, the online network that now includes East Village Radio among its stations, made its debut.

Aside from new programming, you can hear old favorites such as Chances With Wolves and Andy Rouke's Jetlag. (As Brooklyn Vegan pointed out yesterday, Dash is ad and subscription free.)

The comeback comes just about a year after East Village Radio called it quits in May 2014, as we first reported. At the time, East Village Radio CEO Frank Prisinzano said licensing fees and Internet costs did in the 11-year-old station with a surging listener base.

How will things be different for EVR2? "We have an infrastructure that we didn't have before," Peter Ferraro, the general manager/head of programming at East Village Radio, told us in April. "Last time it was us trying to really bootstrap it … I don't know if we had the team in place. Now we have someone looking after the licensing situation for us."

Yesterday, Ferraro told us that there are a lot of great things in the EVR pipeline, such as ticket giveaways and special studio guests… However, the station continues to fine tune its programming, so don't expect it to be exactly like it was when they signed off in May 2014.

You may access EVR here. (Follow them on Twitter for all programming notes.) And you may still find DJs and guests at EVR's revamped studio at 19 First Ave. between East First Street and East Second Street.

Previously on EV Grieve:
Exclusive: East Village Radio is signing off after 11 years; final day of broadcasting is May 23 (53 comments)

Signs of life at East Village Radio, but what does it mean?

1st look at the revamped East Village Radio studio on 1st Avenue
Posted by Grieve at 4:40 AM

I still don't understand the financial model. So Dash doesn't require a membership and doesn't have ads. How do they pay for the licensing fees and infrastructure?

But where is Delphine Blue?

I hope Delphine Blue is back. She seemed so sad on the last show.

And Morricone Youth was amazing.

dmh said...
I hope Delphine Blue is back. She seemed so sad on the last show.

I'll ask her if she's coming back.