Rent hike will force Bikes, By George! to close on East 4th Street 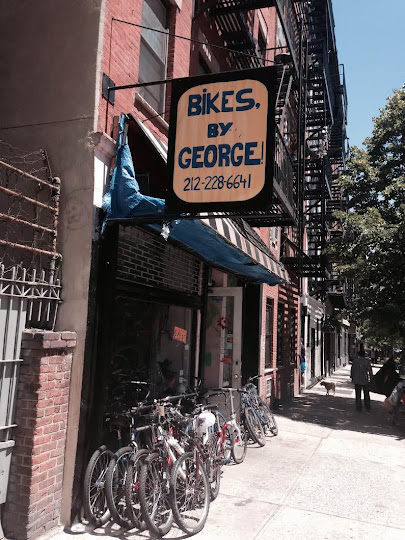 Several EVG Facebook friends have passed along the news that Bikes, By George! is closing at the end of the month. Apparently there's a rent increase, and proprietor George Philbert can't afford the new lease. Friends say that George is uncertain if he will be able to reopen in a different location.

After working in several bike shops when he arrived in NYC in 1970, George finally opened his own place in 1980 on East 12th Street. A rent hike saw him move to his current location at 193 E. Fourth St. just east of Avenue A in 2008. You can read more about George in this article from The Villager.

Previously on EV Grieve:
RIP Dominic Philbert
Posted by Grieve at 4:30 AM

Email ThisBlogThis!Share to TwitterShare to FacebookShare to Pinterest
Labels: Bikes by George

I feel bad for George - I remember when he started out on 12th St. - he has kind of been chased (rent-wise) from pillar to post. He runs just the the kind of business we need: local, personal, caring.

Hope he can find a new space. C'mon there must be one decent NYC landlord around who can help with this (a la Bonnie Slotnick's book store move) - PLEASE?!

Why dont you buy a building and give him a deal? Its not your money so you dont care. EV commentets should pool your money to 'save' NYC. Oh thats right you dont have any. SMH.

I purchased a bike from George at the old location on East 12th in 2003. I lived on the corner. I parked outside one night (locked up) in front of the old Italian lady's bodega (anyone remember that place?) and the bike was stolen. It was nothing high end, but still. A few days later, I see some guy wheeling down Lafayette on what appeared to be my bike. I stopped him and asked if I could look at the bike. Mentioned to him I had the exact bike, which was stolen. I said there was a kink in the brake line before pointing out, and then showed him. He was blown away. It was the same exact bike. He told me he bought it from, guess where? George, the day before. Guy was cool. We both went over and asked George for an explanation. George was very sorry. His son apparently, or maybe someone they bought from or hired, was stealing bikes. I really don't know, but I always had my doubts about the son. I got the bike back and the other guy was refunded his money immediately. Life went on.

9:33: If you find that you're SMHing a lot you might have ear mites. I would suggest that you get that checked out at a local veterinarian - and I'd hurry up because as rents are increasing they may be forced out, and then where are you going to go for treatment?

OH BOY! Room for the next mid-America food trend! Perhaps a record breaking line & wait of 2 hours for something stupid on a dairy, gluten, nightshade, nut, free, somthing.

OH BOY! Room for a new food of the moment joint. Perhaps a record can be broken with a 2 hour wait for something gluten, nightshade, dairy, meat, egg, wheat, sugar, & whatever other "allergy" comes up

I never realized it was Bikes, By George! With the comma and exclamation - I always thought it was, Bikes by George. I had no idea it was a pun.

I suspect having another bike shop around the corner on Avenue A didn't help.

Selling stolen bikes used to be a problem at BBG. I think they sorted it out, because I haven't heard anything about it for several years.

I told my husband the news and he replied, "you mean 'Bikes Stolen by George?"

Bedford and Bowery and Liz Flock should have an office here and call it articles/posts/trust stolen by Liz.

We have know George 37 years, what a great guy and a great shop, a loss for the neighborhood...he always brought his dog, but now she's too old....Georges eyes light up when I bring my dog by for a treat...a very sweet man.....

I've been living in the EV for 2 decades and biking the entire time. George has always been a reliable, affordable place to go for an inexpensive quick repair. He's a hard worker, a good bike mechanic, and a familiar friendly face in a neighborhood that has become ridiculously overpriced. Best of luck George.

I once took my bike there that needed a repair (the brake cables came off) and asked if he did repairs. George said yes, fixed it, and wouldn't take a penny.

GOOD! finally we can free up that valuable space being selfishly used by some dirty local to peddle his peasant wares. Hopefully we can get another Chase bank branch in there, as the neighborhood DESPERATELY needs another one.

i always walk east/west on east 4th street. sometimes the whole sidewalk is blocked by george's bikes and customer. pretty annoying. kinda happy that it will be gone. but george seemed like a nice guy, so i feel bad for him.

When George was on 12 th st he was ok. But after he moved to 4 th.... twice he screwed up bike repair for me. He put old used parts on my bike. When we had the con Edison blow In the east village and the days of hell after, my bike fell apart cause George put on gears from an old old bike. This was told to me at another bike repair when I had to redo the job. George was slipping and I swore I'd never use him again, so sorry George but I'm not sad you are going . I paid fifty dollars for the original job then had to redo the job with the proper gears for 85 . And I sure needed my bike after the explosion ...I'm 64 and don't walk well . Just my experience with George .