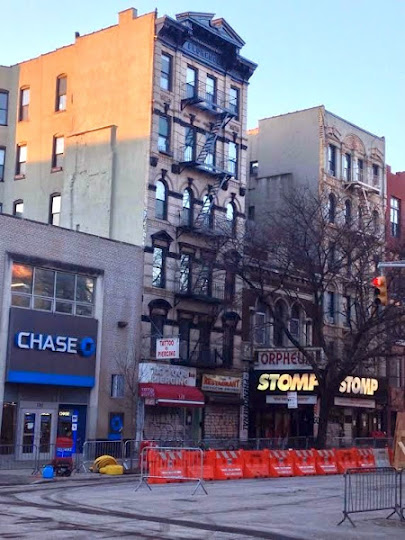 Angry tenants at 128 Second Ave. spoke out yesterday about their ongoing issues with landlord Icon Realty, who they say has yet to fix the building's heat, hot water and gas despite a court order to do so.

"Icon Realty has done very little to restore the services in the building so these tenants are taking it to the next level and bringing contempt of court charges against their landlord to restore these services," said lead organizer Brandon Kielbasa from the Cooper Square Committee, which has been aiding the building's tenants.

According to a lead inspection conducted by the Department of Health and Mental Hygiene and provided by the tenants’ attorney, dust samples collected during a March 3 inspection found lead levels up to 250 times the legal limit

The building also has 114 violations, all of which were issued this year, according to a Department of Housing Preservation and Development spokesman, leading to $4,000 in charges for emergency repairs the agency made as well as heat and hot water inspections.

HPD also sued Icon Realty in an effort to get the landlord to correct all of the building's violations and civil penalties. The case was settled earlier this month, the spokesman said, with the owners paying $7,500 in fines and agreeing to correct the violations.

An Icon spokesperson told DNAinfo that the court-ordered deadlines did not give Icon enough time to fix the building's issues. In addition, the spokesperson said that Icon installed a temporary electric water heater and provided hot plates to residents.

The spokesperson said that the landlord hopes to have the heat and hot water fixed in the next few weeks.

The building's residents have been without heat, hot water and gas since March.

"The tenants in 128 Second Avenue have endured enough," Councilwoman Rosie Mendez said in a statement released yesterday. "Icon Realty has hired armed 'Fire Marshalls' to patrol the building as a form of intimidation when all that they are required to do is ensure that tenants do not use the detached fire escape. The principals of Icon Realty are bad actors that are in contempt of court because they have not restored court ordered necessary services such as gas and hot water. The Judge should set an example by throwing the principals of Icon Realty in jail until all 67 life threatening and immediately hazardous violations out of 114 outstanding violations are cured."

Icon Realty took over ownership of the building between East Seventh Street and St.Mark's Place in the fall of 2013.

its the LLC game - no responsibility - all the profit.

It's criminal. $7,500 in fines means nothing to Icon. In the meantime they're allowed to stall and do nothing leaving tenants in deplorable conditions. Where are the Mayor and Attorney General when you need them?

$7500 in fines for Icon is like the rest of us buying a postage stamp. Fines for these violation are out of date (circa 1966) especially with the big corporate landlords buying everything. How about jail time, fines in the 10's of thousands and some bad press to get something moving. My heart goes out to the people living here and a pat on the back for fighting for their rights.

Just what do you have to do to get the City to take over a building? Where the heck is the district attorney in all of this? If you're not secure in your home, little else matters.

Guaranteed that the "7,500 in fines" came no where near close to paying the cost of HPD prosecuting the case against Icon.

It's time that NYC began levying fines commensurate with the so-called "affordable" rents in the city. A fine equivalent to one month's rent, each month, for every apartment in the building would get some action. A one-time fine like this does nothing but give the landlord and their attorneys something to laugh about.

If Rosie wants to help the tenants - she should be working with Con Ed and the Landlord to get the gas restored in the building. Many gas turn on delays are due to Con Ed and the procedure is not simple. I am not saying Icon is not at fault here as I am privy to the details - but if Rosie used her political connections to get Con Ed to expedite their process she may actually be able to help the tenants.
As far as Rosie's comment on putting the owners in jail due to HPD violations, on that theory - Latisha James should also be in jail see
http://www.dnainfo.com/new-york/20140609/fort-greene/letitia-james-breaks-city-rules-with-rental-property-records-show

"Where are the Mayor and Attorney General when you need them?"

Busy arresting some random landlord in crown heights who is significantly less politically "connected" than notorious offenders such as Icon.

I am really rooting for these tenants. They are clearly right - now let's see what happens.