After reading our post from Tuesday about the demolition of the penthouse at 515 E. Fifth St., two EVG readers sent along photos showing the progress… on Wednesday … 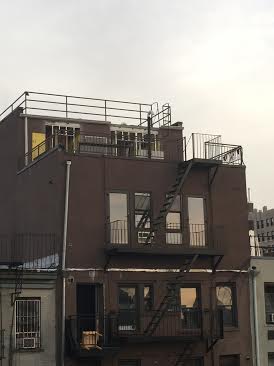 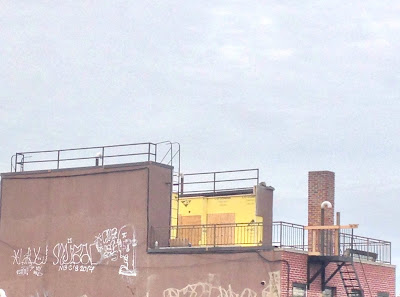 After seven years of legal wrangling, the Board of Standards and Appeals (BSA) told landlord Ben Shaoul that he has until the end of July to provide proof that the illegal penthouse here between Avenue A and Avenue B has been demolished … then the BSA will reopen hearings on the variances that Shaoul and Co. are requesting.

One 515 Penthouse Removal Watcher told us that he is surprised that the demolition work is actually taking place (given that it is Ben Shaoul and all).

These inner walls would make for a great graffiti gallery. Mr. Brandt are you listening?

surprising anyone enforces laws on these, many roofs have had additions in the last 10 years.

The criminal part of this penthouse is that Ben Shaoul altered the front roof line--in a heritage district--by 2 full stories. To restore the original, the owner will have to remove both of those stories, not just the uppermost one. I have enjoyed watching the highest one coming down, and can only hope the community board make him continue until both levels are completely gone.
East 5th Dweller

June 30th. Only 1 month away from the removal deadline. Little has changed since that newest photo was posted. A few workers pulley down the odd bucket of sheetrock most days for a couple of hours, then vanish. Still intact: the entire illegal 6th floor and key elements of the 7th floor--standing high, ridiculously, on a street where all surrounding buildings and rooflines are only 5 floors. When you think about how fast Ben Shaoul can put up a new building, this is suspiciously lousy progress.