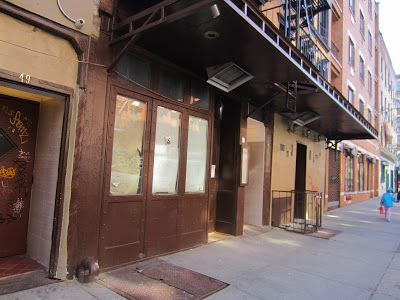 CB3's SLA committee meeting is tonight 6:30 in the CB3 office, 59 E. Fourth St. between Second Avenue and the Bowery.

And one applicant we looked at is no longer on the agenda. The owners of the Brazen Fox had plans to open another bar-restaurant directly across the street from their current two-level bar-restaurant on Third Avenue and East 13th Street. 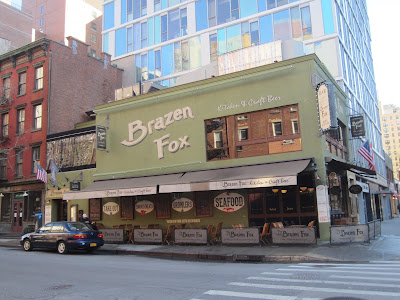 We do not know why they are a scratch from the meeting. In any event, this would be a tough sell... a full liquor license with a sidewalk cafe for a space (Gothic Cabinet Craft shop) that was not previously licensed within a saturated area... from applicants who already operate a successful space right across the street. Not sure what the public benefit is here. 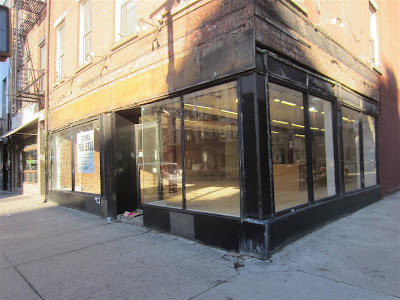 And there was neighbor opposition to the application as well... based on the flyers on the block... 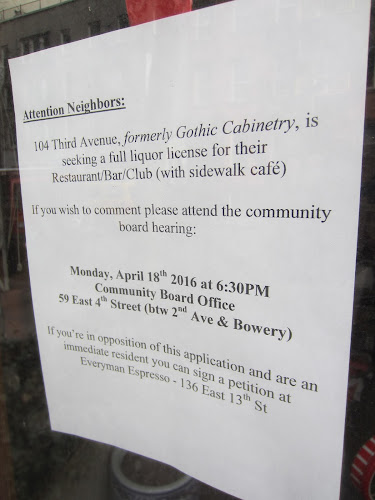 Meanwhile, here's a quick look at some of the other East Village applicants on tonight's meeting agenda...

A venture called Lamia's Fish Market is in the works for the long vacant storefront at 45 Avenue B between East Second Street and East Third Street. The questionnaire (PDF) on file for public viewing at the CB3 website shows a restaurant with 40 tables seating 160 people. The proposed hours are 4 p.m. to midnight Monday though Friday; 11 a.m. to midnight Saturday and Sunday.

The committee voted to deny the application. The Lo-Down has the details about the operators here.

The previous tenant at this address, Alder, had an eight-table, 16-seat sidewalk cafe.

This is the former North River/Nite Owl space near East 10th Street. The owners of the Belfry on East 14th Street are looking to open a bar-restaurant here serving American comfort food, according to the questionnaire (PDF) on file at the CB3 website.

The proposed hours are 11:30 a.m. to 2 a.m. Sunday through Wednesday; until 4 a.m. Thursday through Saturday.

They were denied at the February meeting ... this will be the second Virgola location in the East Village.

The restaurant has been closed for the past week. Looks like a renovation, though there aren't any signs for customers.
Posted by Grieve at 4:05 AM

Oh silly me, I was excited to think that the neighborhood was getting an *actual* fish market. Sigh.

In ancient Greek mythology, Lamia is one of Zeus' numerous mistresses who became a child-eating demon thanks to Zeus' wife Hera who, in a fit of jealousy, killed all of Lamia's offspring and transformed her into a monster that hunted and ate the children of others. I'd double check on that fish before eating it...

not to be forgotten - a sidewalk application on the western boundary of the LES - the Bowery ...
Vandal (Bowery Hospitality Associates LLC), 199 Bowery

The East Village has become a monster that hunts and eats its own children and of others.

I don't think Bakery Pizza selling beer and wine is going to have any effect on the level of reveling in the neighborhood. I wish the pizza were better. Tried a plain slice and was disappointed. Speaking of disappointments, Bagel Belly bagels are like hockey pucks. Though I've never actually held a hockey puck, I can imagine...

Meanwhile over at Coyote Ugly, there were three lasses dancing on the bar at 4 pm yesterday afternoon (Monday) -- doors flung open for all to see, since there weren't any patrons at that hour. The fun never stops in the EV!

Bagel Belly is going to need to get a liquor license if they can't figure out how to make the seeds stick to the bagels.

Why the fuck does a fish market need a liquor license?

@ 10:24. Bagels and beer. Double your chances of getting that belly.