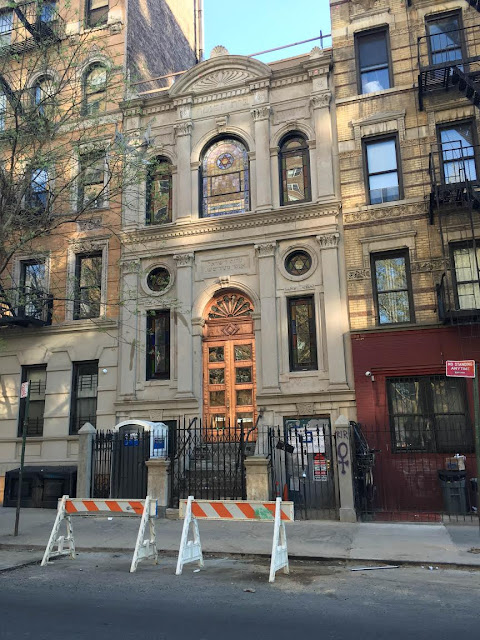 On Saturday, workers placed the refurbished front door back on the former Congregation Mezritch Synagogue at 415 E. Sixth St. between Avenue A and First Avenue... the door is made of red oak and faced with copper on its outside. The New York Times noted last December that the door "is being returned to its original state, though some wooden panels are being replaced by glass." 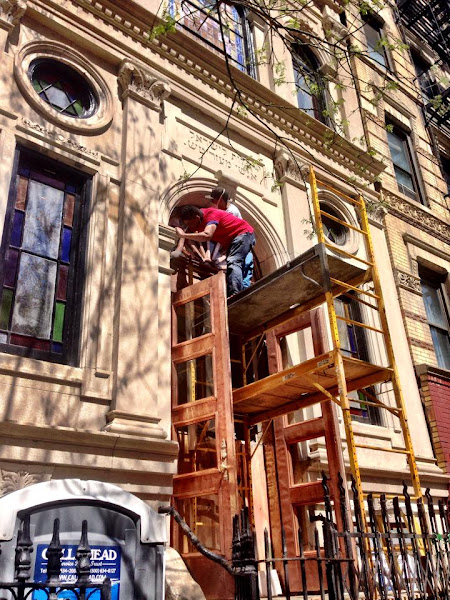 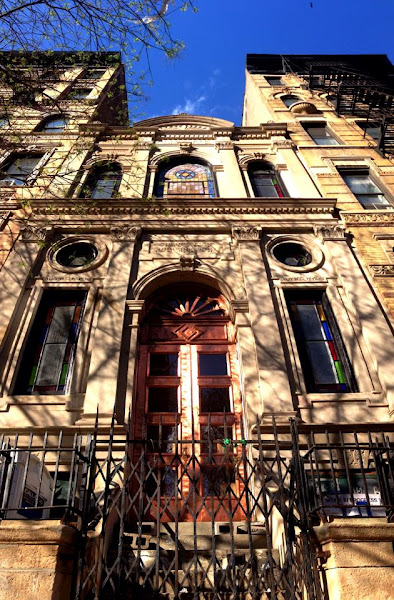 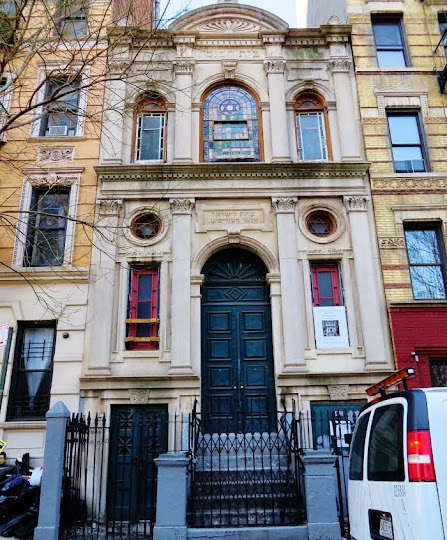 A worker told EVG Facebook friend Michael Hirsch that this main entrance will no longer be used... that the entrance to the building will be on the right-hand side... 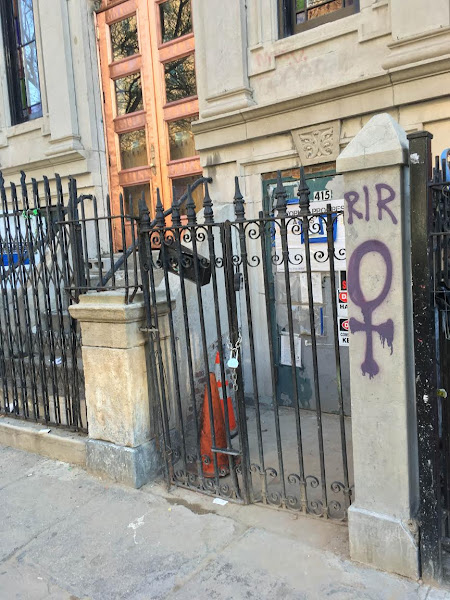 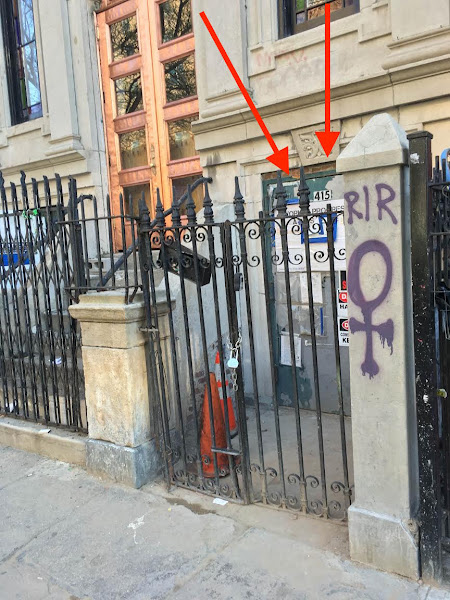 The worker also claimed that the congregation will no longer have a presence in the building, which, if true, comes as a surprise.

As previously reported, the synagogue — active here since 1910 — had fallen on hard times, "with a dwindling membership and few resources to maintain the building," as the Times noted. Previous plans called for the demolition of the building. Those plans never materialized, and a new developer, East River Partners, emerged and proposed the current arrangement.

Also, for background via the Times:

So, if the synagogue isn't going to have a presence here, what's the money going for... and who has it? Of course, the worker could have simply been confused (or misspoke), meaning that the whole structure will no longer house the synagogue.

The three residences (two units will have the original stained-glass windows) will range in price from $2.95 million to $4.4 million.

The building's slogan is "History reimagined … For modern living."

History reimagined with $4.4 million penthouse at former 6th Street synagogue
Posted by Grieve at 4:20 AM

The original color of the door looked a lot better. But I expected this type of easement to occur. Why would you even think of maintaining a Jewish imprint here?

I agree, the old dark patination really added to the beauty of the doors, as did the now-removed panels; this new iteration just looks like something Trump would clap onto one of his tacky edifices. Hopefully they didn't chemically treat it to stay bright and shiny; it would look lovely if it mellowed into a nice Statue of Liberty green. Weird that no one gets to use it anymore, tho.

Agree the original color was better on the door however I suspect the copper is not lacquer sealed and will darken quickly with a patina soon, at least that should be the plan.

As for the religious stained glass window, I can't imagine spending a couple of million on a place and having to keep that window. The congregation should take it.

What does "RIR" supposed to mean - rest in reace? Those Prince fans, so meshugenna!

Ugh, no synagogue? Ok, so it is now just a converted synagogue that is 100% condo. Ok. Maybe they could put a frogurt place in the lower level instead?

Donnie - Apparently the synagogue will remain on the ground floor (and possibly the first).

"with few resources to maintain the building" - Man, did they even try over the last 40 years?

Hoping the Prince tag stays imbedded in there, even as a fade!

This is a problem with many synagogues of a certain era: they were founded by folks who all came form the same village back in Europe (I believe this one is from a Polish group). once folks move out of the area (as they often did back then...not seeing it as a sign of pride like us that we live in tenements for decades), it's not easy to get your kids to make a journey back here just to have a minyan. Or most, likely the kids aren't as orthodox as grandpa was.

I've been n this pace a few times on LES tours. It was a death trap. There was hardly ever a minyan (I was grabbed a few times walking by and I'm a tattooed queer guy, but still a jew...so any port in a storm), and the average age was 80 something. They had an unpaid rabbi serving them, which is rare. And, unlike some of the other old orthodox shuls in the area, like the Stanton St Shul and the one down the st on e6th), they didn't try to bring in new members...because it was about THEIR community. I'm amazed they held out so long.

The actual sanctuary hadn't been used in ages because it was too dangerous. (As in scary unstable dangerous) The fact that they were being given a modern sanctuary is a good thing. A true mitzvah of these new landlords.

I'm actually curious how many congregants are still alive. Maybe the remainder are taking it as a buyout?

And here I thought it meant "Rock In Roll". Oy, those kids, I'm telling you!

Relax, they use Shabbos goys to do their work on Saturdays.