Ian Schrager’s Public Hotel at 215 Chrystie St. will have plenty of places to drink and eat 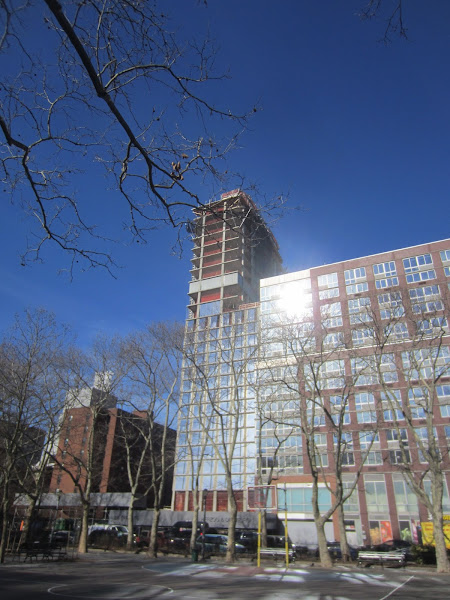 Been meaning to do another post about Ian Schrager’s Public Hotel at 215 Chrystie St. just below East Houston...as you can see on the horizon (these photos are from mid-March)... from many different vantage points... 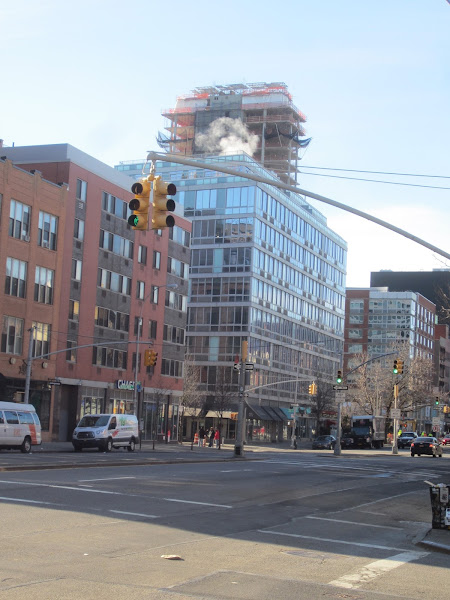 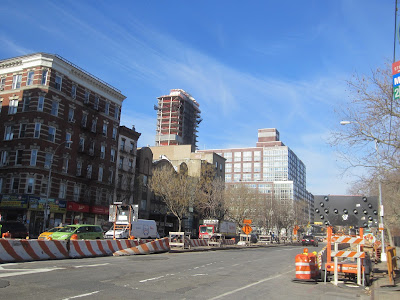 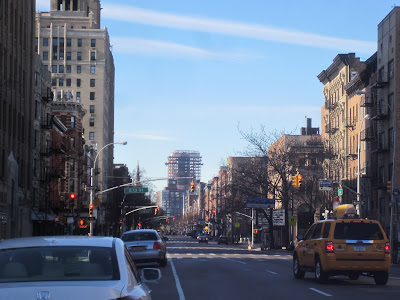 Sigh. Because someone will ask! 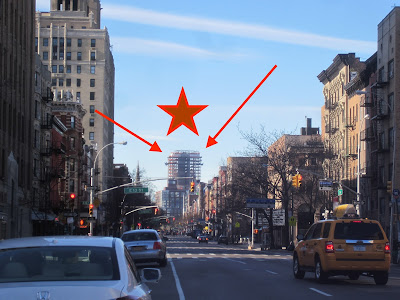 When completed, the 28-story Herzog & de Meuron-designed building will feature 376 hotel rooms via Schrager's Public Hotel brand, topped off by 11 ultra-luxury condos, including PH3 that is selling for $18.75 million.

Hotel aside, the property promises to be "a luxe nightlife playground," as the Lo-Down recently put it ... including two restaurants from famed chef Jean-Georges Vongerichten. In total, there are 11 venues within the complex, though not all will serve booze. (Maybe just 8?) Still, enough licenses that CB3's SLA committee had a special session Monday night just for this application.

And Schrager was even there for part of the four-hour meeting, where some nearby residents expressed concern over the potential for the high-end nightlife wooshow. Here's Allegra Hobbs at DNAinfo with some meeting coverage:

Ultimately, [CB3] members approved all interior spaces as presented, but recommended the outdoor spaces, one of which is glass-enclosed, shut down at 10 p.m. When asked whether Schrager would comply with the request, a lawyer for the hotelier did not comment.

Schrager’s reps assured community members their sound-proofing methods would lock in any loud noise, but still agreed to meet with neighbors to test out the methods once installed in addition to quarterly meetings with tenants during the first year of the hotel’s operation to gather feedback.

BoweryBoogie attended the meeting as well:

Schrager opened proceedings with an introduction, conveying his intention to create “something great for the neighborhood” that embodies the spirit of the area. He went on to toot his track record across forty boutique hotels, yet in condescending tone. Assumed the panel wasn’t familiar with his vision and how to license hotels. There were frequent defensive outbursts.

Hotel bars have always been gathering places for people who do not stay in the hotel. Think of the Plaza Hotel, or the Carlysle. Hotel bars are great places, and a lot of fun.

Welcome to the Houston St. Horridor. Appropriate attire is required. No designer shoes, no designer shirt, no service.

Anon @ 9:38--what star? Can you or EVG or someone please delineate its location via arrow? Thanks.

This building is a lot taller than just 28 stories...is anybody counting? Isn't that some sort of illegal addition?

I have a 20 something niece visiting me from Sweden and here dream is to go to a hotel rooftop bar. At her age I only went to bars in basements.