Looking at the incoming Capital One Café on Union Square 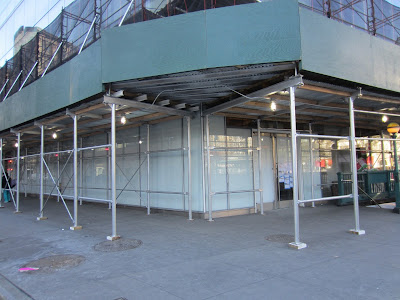 EVG reader Max reminded us the other day that a Capital One branch is in the works for the southwest corner of Broadway and 14th Street... and not just any bank branch.

As Crain's first reported last May:

Capital One has come up with an alternative to the staid retail bank branch. It will launch a concept in Union Square, at 853 Broadway, on the building's ground, basement and mezzanine levels. The entrance will feature a large café operated by Peet's Coffee. The space upstairs will differ from a typical retail bank branch. Capital One will create a large work lounge, where customers can camp out and use free Wi-Fi.

Anyway, we walked by the corner on Sunday... there isn't any visible signage up yet... so not much to see at the moment... 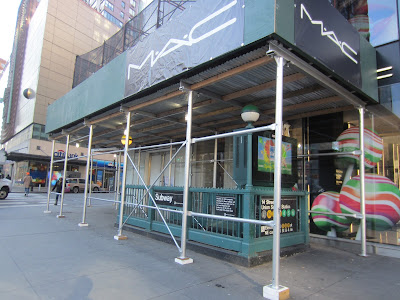 There hasn't been any official word on an opening date. It could be a little while longer. Looks as if some of the necessary permits weren't approved by the city until this past December.

There's another Capital One Café on Third Avenue and 58th Street ... as well as in other cities.

This prime corner has been sitting vacant since Shoe Mania abruptly shut down in July 2012.
Posted by Grieve at 4:13 AM

It would be better if Paterson Silks was still there.

If you use free wi-fi at a bank you're a fool.

Interesting isn't it, that this prime corner has been vacant for nearly four years and that it took yet another bank to be able to afford the rent.

I saw that the 58th street and 3rd avenue location is closing per sign on the door.