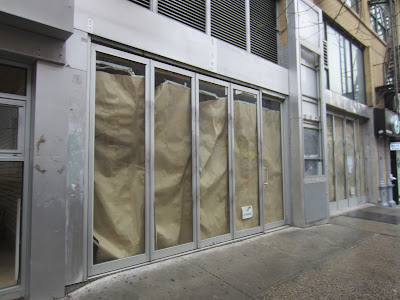 Those long-empty storefronts at 37 St. Mark's Place and Second Avenue will finally (probably!) be getting a new tenant. 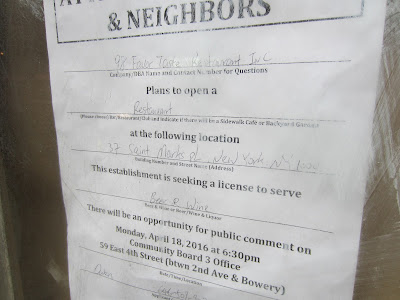 The applicant seeking a beer-wine license for the location is Liju Lin, who has run the 99 Favor Taste restaurant in Sunset Park since 2011 ... and the Grand Street location since 2012.

Per the questionnaire (PDF) posted to the CB3 website, the St. Mark's spot will be 98 Favor Taste. The restaurants specialize in traditional Korean-style barbecue and Chinese hot pot meals. The hours will be noon to 2 a.m. daily.

These storefronts have been vacant going on five years now. Timi's Gelateria Classica™ closed at the end of 2011 in one of the spaces… while Michael "Bao" Huynh's Baoguette Cafe shut down at summer's end in 2012.

[Updated] Baoguette Cafe still looks rather closed
Posted by Grieve at 4:25 AM

St Marks place has had a terrible track record lately with new businesses closing after a short time, even 7-11 closed up in record time. Perhaps being situated closer to 2nd ave will help this place get past the first year.

How do the building owners afford holding onto all of these storefronts without rents for years at a time? This question goes for this place, as well as all the storefronts on E 9th and Avenue A between St. Marks and 9th.

Good question. I have always thought they write off the lost due-to-ridiculously-high-asking rents off on their income tax at full sticker price.