The Royal has closed on 4th Avenue 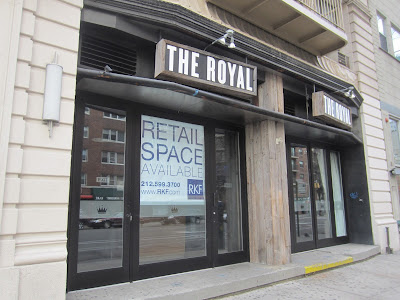 That's all for the Royal, a sports bar with 40-plus TVs, on Fourth Avenue between East 12th Street and East 13th Street.

The for rent sign arrived on the front window this past Friday, according to a neighbor.

The Royal opened in January 2013. Previously it was the like-minded Forum.

There isn't any announcement about the rather sudden closure on the Royal's website or social media properties.

Here's some rental info about 127 Fourth Ave. via the RKF listing:

• Located steps from the Union Square subway station, which has an annual subway ridership of 35.6 million, ranked the fourth busiest station
• The area services neighborhood residents, students and office workers
• The space is fully vented for cooking
• Lower Level can be used for seating and prep
• Previous tenant’s installation is in excellent condition including all kitchen equipment and HVAC
• Full liquor-license in place with 74 seats
• Tenant can apply for Public Assembly to achieve additional seats

There's no mention of the rent for the two-level space that totals more than 6,600 square feet.
Posted by Grieve at 4:15 AM

Email ThisBlogThis!Share to TwitterShare to FacebookShare to Pinterest
Labels: for rent, The Royal

It will be nice to have 4th Avenue be a semi-quiet street at night again, for at least a little while. A refuge from insane 3rd Avenue. Please let whatever comes here next be a "real" restaurant and not a megabar/nightclub.

Remember there was a murder here? When it was Pop? In my mind, the place has some bad karma to overcome.

owners were apparently tired, made enough money and felt it was the right time to exit

Not a great loss by any stretch of the imagination.

I'm waiting for this strip to get renamed "The Bowery" north. Too bad the Death Star has extended "Midtown South" into the East Village or NYU East.

Good.. please no more god damn Sports Bars. The transplant bros and hoes have been catered to for waaay too long, it's time to move along to the next target neighborhood on their obnoxious rich brat gentrification map.

What will become of this space? hmm.. according to the trends of the past 15 years.. another god damn Chase or Starbucks location.