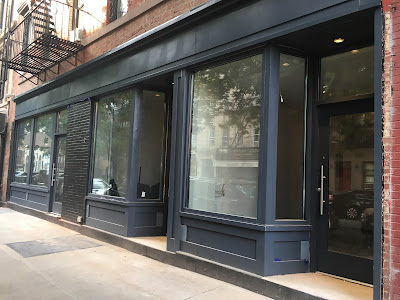 There are three spaces in what are being presented as the Shops on East Fifth Street. A tipster tells us that the middle space will house an Argentinian coffee shop. The other two storefronts are for rent... the bare-bones listing at Coldwell Banker Commercial notes the asking rent is $125 per square foot... 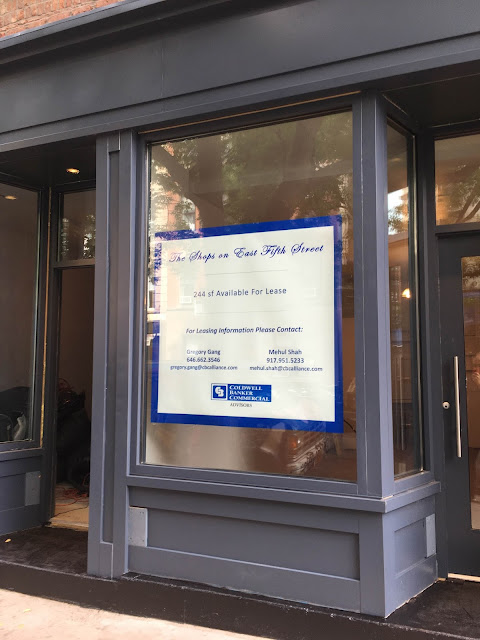 As previously reported, in July 2014, the owners of the previous three businesses had to vacate their storefronts due to a structural issue in the building at 300 E. Fifth St.

S & P Liquor & Wine eventually moved to Second Avenue … while Jamie the check-cashing guy, whose family owned the business for 68 years, had to shut down at the end of 2014 as repairs dragged on. He had been operating for five months from a secure van outside his shop. The Today's Cut hair salon moved to East Seventh Street just west of Avenue A.

Previously on EV Grieve:
3 small businesses temporarily closed due to structural issues at 300 E. 5th St.
Posted by Grieve at 4:20 AM

Email ThisBlogThis!Share to TwitterShare to FacebookShare to Pinterest
Labels: the Shops on East Fifth Street

I miss Jamie. Does anyone know if he's doing ok?

They are moving into a very competitive area. There's already a "gourmet" coffee shop less than half a block away, next to Cooper Craft Ale and then there's the famous Abraço on 7th Street, which roasts its own coffee and sells home-baked pastries. http://newyork.seriouseats.com/2009/01/abraco-coffee-shops-east-village-nyc-manhattan.html
And across the street is Moonstruck or whatever it's called now for the people who don't want to pay 4+ bucks for a cup of coffee. I wish them luck.