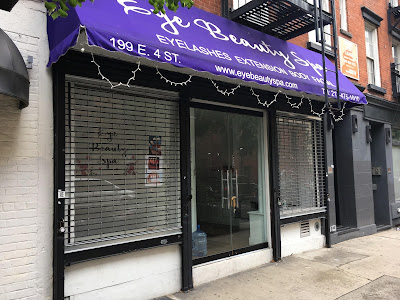 The Eye Beauty Spa closed a few weeks ago at 199 E. Fourth St between Avenue A and Avenue B following nearly 15 months in business.

The Eastern Consolidated listing says that all uses will be considered for the 500-square-foot space, which has an asking rent of $4,500 per month. (The storefront previously housed Salon Champu until December 2014.)

This building was one of six on Fourth Street that the Kushner Companies bought for $49 million from Ben Shaoul’s Magnum Real Estate Group and Meadow Partners back in 2013.
Posted by Grieve at 4:01 AM

$4,500 seems like a relatively reasonable ask...these days, at least.