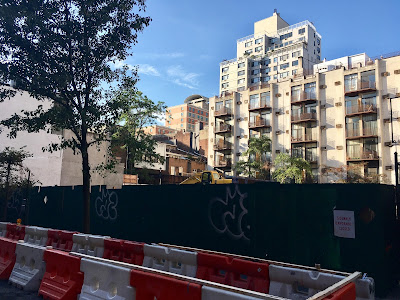 As I mentioned last week, the city has approved permits for the construction of the 13-story hotel coming to 11th Street between Third Avenue and Fourth Avenue.

The foundation work is underway.... 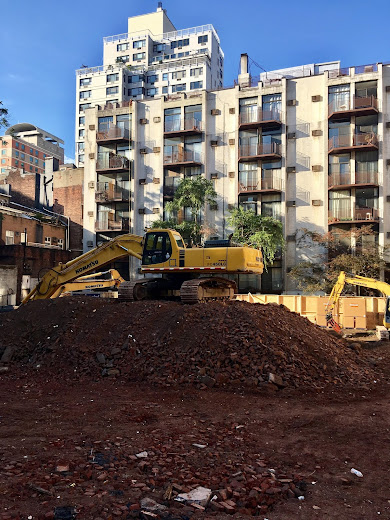 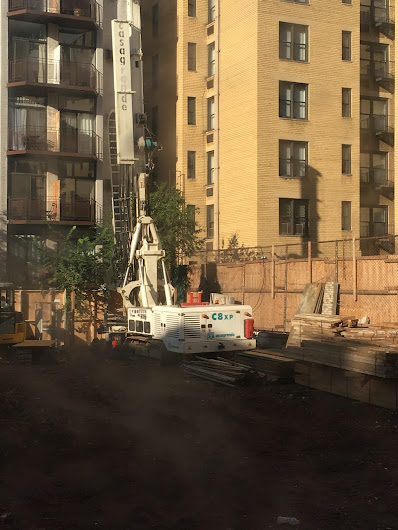 ... and a look at the hotel for Marriott's Moxy brand is now on the plywood... 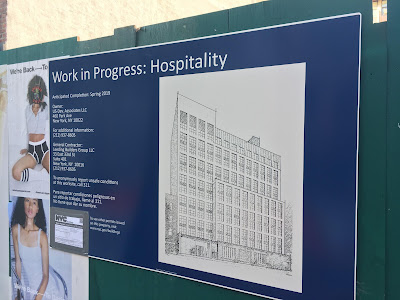 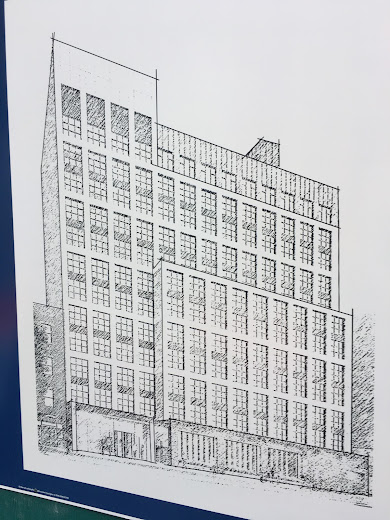 That lines up with the only rendering that I've seen in circulation... 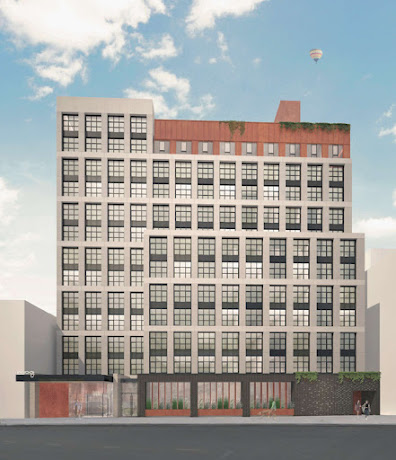 Work permits on file with the city show that the hotel will be 78,361 square feet — about 250 square feet per room. In addition, the permits show a lounge in the hotel's basement along with an "eating and drinking establishment with accessory terrace." The application also shows a lounge and another eating and drinking establishment on the first floor/lobby (not sure if these are connected) ... as well as a "grab n go" food and drink space. There's also another bar-restaurant planned for the top floor.

The Moxy website shows that the 11th Street hotel is expected to open in late 2018. All the background is at the links below...

There's another Moxy opening up by Penn Station in a few weeks. This coincides with the cities plan to move the fashion district to Sunset Park in brooklyn.

The donors always get what they want.

NYC is well on its way to becoming the biggest tourist trap in the world which of course means residents will pay with quality of life loss. Mid-town south is a reality.

There goes the "Taxi Driver" neighborhood! CB3 are you talking to me?

Yes, Manhattan is a tourist trap.

This entire project is offensive, and I hope the owners go broke on it. Where is the action from any part of NYC government to respect this neighborhood an actual NEIGHBORHOOD? We are NOT Times Square, we are NOT midtown south. But I guess I can look forward to that kind of congestion and the predominance of transients who don't give a damn about this area over the actual interests/needs of we who live here 365 days a year.

I'm beginning to feel like I live in some backwater building in the theater district, invisible to everyone else who's just "passing through".

The city doesn't care, full stop. They've sold us out for $$$ in the high mucky-mucks' pockets.

"I'm beginning to feel like I live in some backwater building in the theater district, invisible to everyone else who's just "passing through".

Welcome to the neighborhood! We are Midtown South! Resistance is futile!

The MOXY is just a giant bar masquerading as a hotel. Welcome to the MOXY New Orleans. Please ignore the garbage dumpster by the front door and the vomit on your way to your room. Enjoy!! Via Trip Advisor:

"Highly recommended if you want a place to stumble into after a drunken evening in the French Quarter. The hotel bar will still be open, the music will be loud, and you can go to your room just above this commotion and pass out in your stupor, blissfully unaware. However, if you want a hotel that fulfills its primary obligation of a clean, comfortable, and quiet place to rest, RUN, don't walk, away from this place.

Should you need something, say to check in or out, take a number at the bar. Once the bar patrons get, and pay, for their drinks, the bartender might have a moment to tend to you. Oh, they try hard, but there are only 2 of them, and lots of thirsty customers in the bar making the hotel lots of money, and then there are these pesky people actually wanting to stay at the hotel.

This is an unimpressive hotel. Period. Marriott claims it's supposed to "European" style. Maybe, but not any part of Europe that I've been to (France, Germany, Spain, Portugal, Italy, Greece, Netherlands, UK, Belgium, Sweden, Norway, Finland, etc.) Now New Orleans style -- that is true, in the worst sense of that term. But then it all fits -- the stinking dumpster next to the front door (it belongs to the next property, but it's still right there), the vomit on the sidewalk, the swinging basket chair in the entry, complete with scantily clad women who may or may not be staying at the hotel -- all create a lovely ambiance.

So, there you have it. Go get plastered, find the hotel bathed in pink light, puke on your way in, say hello to the dollies in the lobby, and be lulled to sleep by the pounding, throbbing music emanating from below your room. Enjoy!"

progress these days only means more profits for the few, nobody living on the LES will benefit from this hotel and please don't tell me servers, and those that clean the rooms will be anything over minimum wage. This is only second to the Rivington House scandal giving to us by De Blasio. It won't be long before people in Hello Kitty and Spiderman costumes start working in Astor Place

It depends on what part of Manhattan is a tourist trap. Alphabet City not so much.

Three years ago, I helped a young woman I knew, move into the large apartment building that is now gone, which is the new spot for the hotel. Its a crime really. Such greed and oblivion from those in positions of power and prestige. When I walked past it a couple of months ago, I almost gasped. I didn't realize that very building had been taken away. Its shitty what is happening in and to our city. It makes me nauseous. Soon, many of us will either flee by default, defeat or coercion. Unless certain laws are in place to protect tenants and businesses from increasing rent, NYC will fully become like Switzerland, where only the elite wealthy live and work, and where most places echo one another, without the promise of diversity. (

It really does look like a factory ... or maybe a nicer prison.

@10:33am: It won't be long before people in Hello Kitty and Spiderman costumes start working in Astor Place." Puhleeze don't give anyone any new ideas; it's bad enough as it is.

What a rank piece of colorless, overbearing shit.

Vent Vent Vent. Meanwhile construction workers have jobs, and the hotel will employ people. Whatever happens in the EV, the rant will always be tourists, bro bars, and whatever else people can think of. I didn't see any movement to have the city by the land and construct multi-economic units in the place of buildings that may have reached their useful age.

If NYC continues to become a tacky playground like Vegas, I am out of here, and moving to Paris or Berlin.

Anon. 3:22, vent, vent, vent indeed. It's not like there's a paucity of construction jobs in the city, and while you glorify them and the minimum wage jobs this eyesore will offer, I say in return that it came at the cost of permanent, long term housing for who knows how many of my neighbors, who had no choice in the uprooting of their lives and the demolition of their homes. You might think it a worthwhile trade since it does not affect you, but I am guessing, had you lived in one of those 5 buildings and been booted to the curb with your belongings like do much worthless trash, you'd be singing a different tune.

Alas Anon@5:12 if you think Paris or Berlin will be any less expensive or that living in many sections of either city will be less "Las Vegas" you are sadly mistaken. I'd also suggest that you take a look at medical costs. Yes, for the French it is essential free, but as a non-citizen you will be personally responsible for health care costs. Medicare will not cover you in Paris or Berlin. So dream on, but check out the reality.

What is with all the naysayers on here? So much negativity, sarcasm and judgement. Lighten up.

If someone wishes to live abroad such as Paris or Berlin, whats wrong with that? NYC isn't what it used to be. I too, wish I could leave, and start somewhere anew. As long as he or she has enough funds with their homework on visas complete, it can happen. I've had friends relocate to Europe. They love living there and have had few problems getting settled with work and apts. You sound like the type who enjoys releasing the air out of someone's balloon. In today's stringent climate, dreams are all we have.

I've said it once and I'll say it again:

If you don't like what the East Village has become DO NOT VISIT OR MOVE TO IT. IF YOU LIVE IN THE E.V., MOVE OUT.

Now, ask me "Why should I move out? This is my home?" and I'll tell you "Because you don't like what it's become so why live somewhere like that? And I'm tired of your incessant whining about it."

Let the EV become Times Square and South Midtown. Let it be just people who don't have an artistic or creative bone in their bodies. Give it to them. When it's 100% chain businesses, bro bars, delis, and high-end stores, it will no longer appeal to the people who live and visit there and if it still does appeal to them or more people move in and visit, fine, let them wallow in their boring, artless shit.

You call it capitulation, I call it freedom. Literally do not cross Broadway between Houston and 14th Streets (make The Strand Bookstore the lone exception.) Try that for at least a month and see how you like it. I think you'll find that you're not missing anything that you couldn't find elsewhere.

Geeze Louise. Too much banter and fighting going on here. Calm down. Breathe. It will be okay.