NYPD gives the all clear after L train bomb scare 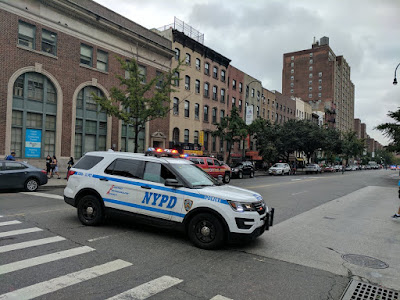 Reports of a suspicious package inside the L train station at 14th Street and First Avenue snarled rush-hour traffic this early evening.

The NYPD blocked off 14th Street at Second Avenue to Avenue A ... the L train was suspended between Eighth Avenue and Bedford Avenue...

b/d there is no L train service b/t 8 Av and Bedford Av, due to NYPD activity at 1 Av. Allow additional travel time.

Patch reported that several nearby buildings were also evacuated as a precaution.

The suspicious package at E. 14th Street / 1st Avenue on the @mta L line has been deemed safe by the @NYPDCT Bomb Squad pic.twitter.com/4iNols7ZJU

I remember James De La Vega, when he had a storefront a few years ago, sold these paper shopping bags that had "Suspicious Package" written on them.

I would make one myself, but I think I'll settle for my lunchbox that says "The Enemy Is Syphilis" on it in Deco-style lettering.