When Webster Hall reopens, there might be a Moxy Hotel across the street 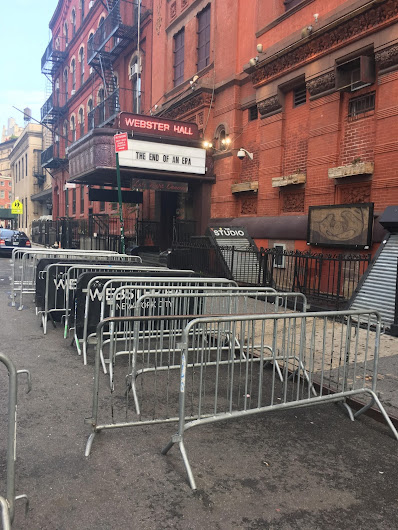 Webster Hall's Ballinger era has come to an end. The venue closed after a performance by Action Bronson on Thursday. (You can find a Webster Hall timeline here. The building has been around since 1886. It re-opened as Webster Hall in October 1992 after the Ballinger family purchased and renovated the space that was known as The Ritz during the 1980s.)

Brooklyn Sports and Entertainment, along with AEG-backed The Bowery Presents, teamed up to buy the landmarked building from the Ballingers for $35 million this past spring. The new owners will renovate the space, doing away with club nights to focus on live music.

Heath Miller, vice president and talent buyer at Webster Hall, told amNewYork last week that the venue will likely be closed for the next 18-plus months for renovations.

"When I was first told about the sale, it was supposed to be a short closure for minor renovations and I was told the buyers had plans to retain the venue staff, but now the closure period has grown to 18-plus months and that plan has switched from a short-term closure to a long-term closure."


As of this morning, the new owners have yet to file any work permits with the Department of Buildings (DOB) for the property on 11th Street between Third Avenue and Fourth Avenue. So that process awaits as does getting the OK for the work via the Landmarks Preservation Commission.

Meanwhile, across the street, construction hasn't started yet on the 13-floor hotel for Marriott's Moxy brand... 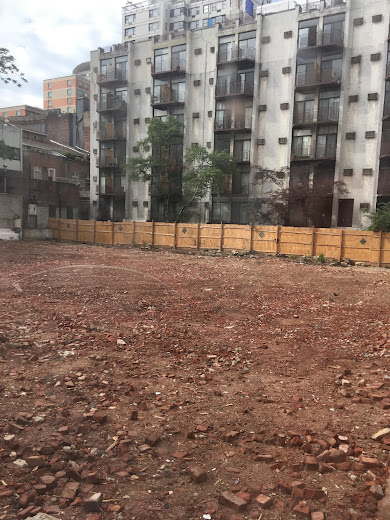 The DOB approved the permits last week, per the DOB website.

The Moxy website optimistically says the hotel will be open in late 2018.

So as of now, the revamped Webster Hall and the Moxy hotel have roughly the same opening/reopening dates.

Billboard has an extensive piece on the past and future of Webster Hall.

The renovations could drag into 2020, and there may be a name change too.
Posted by Grieve at 4:10 AM

Webster Hall condos has a nice ring to it, no?

This block will soon join my list of place never to go to again, others already on that list, The High Line, Times Square, MOMA and Astor place when corporations take it over to promote their services or products.

The Moxy Affect: the sterilization of the EV... and it continues.

Can re-name that block "Vomit Alley" right now. Two big corporate entities vying for every dollar they can shake out of anyone's pocket, but if you remove alcohol from the equation, these developers would walk away.