Kati Roll Company cuts back on their hours 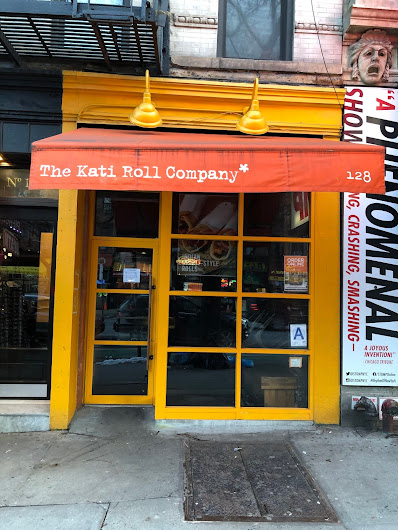 There are now much more limited hours of operation over at the Kati Roll Company at 128 Second Ave. between Seventh Street and St. Mark's Place... Steven noticed that they are just open from 11 a.m. to 4 p.m. during the week, and closed on weekends... 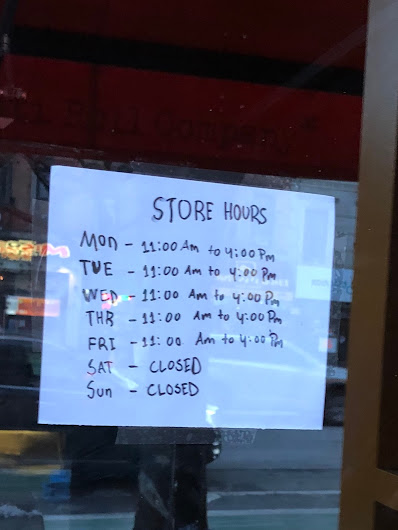 ...other nearby Kati Roll outposts are open much later... no word on why they cut back their hours in the East Village. 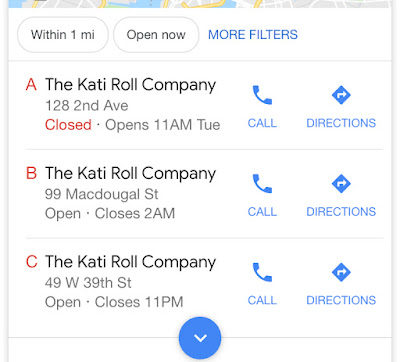 What's striking is that Kati's original hours were 11 a.m. to 2 a.m. Sunday-Thursday, until 5 a.m. on Friday and Saturday.

The longtime previous tenant here, The Stage, the 35-year-old lunch counter, closed on March 30, 2015. Stage owner Roman Diakun had been involved in an ongoing legal/eviction battle with landlord Icon Realty. (You can read that background here.)

With a H/T to EV Grieve Tikka Roll Correspondent NOTORIOUS!
Posted by Grieve at 5:53 AM

It wouldn't be a surprise if Kati Roll closes, just like all of the other stores Icon Realty victimized!

Of course, my friend dragged me there the other weekend and I had to admit they were very tasty and friendly. Sadly, I avoid eating in my own neighborhood now, it feels like an expensive mall. It feels like leeches trying to suck the life out of me.

On a related topic, Grieve, do you have any info about Roman Diakun and his family - what are they doing now?

The bottom line is that the food here is not very good, especially compared to the rolls at Desi Galli on Avenue B, and MasalaTimes on Bleecker St. The one time I went they asked me for feedback, and when I told them the paratha was too hard and the fillings too bland, they were not very happy.

While their paratha was much less greasy than the version they serve on MacDougal Street, which is the greasiest paratha I’ve ever had, the fillings were not as good, How their food could be so inconsistent between locations was the first warning sign, and so I put them on the EV Deathwatch list and never returned.

Another issue is the storefront. The old Stage used a lot of white, with a large sign in red and blue on white and always stood out. Crossing the street going east, the Stage always caught my eye. Kati Roll used a tasteful but narrow orange awning which made ther name harder to read, plus they painted all of the window frames black, making the store much harder to notice. Too late in the game, having realized their original mistake, they have recenlty painted the entire front a shade of light orange, which doesn’t even match the awning.

I don’t see how they can survive much longer with such limited hours, especially being closed on weekends. Desi Galli on Avenue B has excellent Kati rolls, plus entrees made to order. It’s too bad that they didn’t take over this space.

Sorry to say that I haven't heard what Roman and company are doing these days...

Wouldn't it be something if Icon had to start including some sort of a rider in their leases saying that many Icon tenants who have taken over spaces where longstanding and cherished neighborhood stores were pushed out by Icon have subsequently failed and gone out of business themselves owing to lack of community support for anything associated with Icon. xo, jg

I've always enjoyed having lunch here. The food is consitant and the staff is friendly. They'd probably be more successful if they were in any other location than the former Stage Diner. I think people are taking out the Stage debacle on them by not going there and that's too bad.

I have nothing but a sense of loss and mad about that storefront. Icon screwed over s guy who really was a beloved neighbor and killed his business which was a refuge for us...and for what? For their ugly greed and some mediocre mall food. Why would I ever go there?