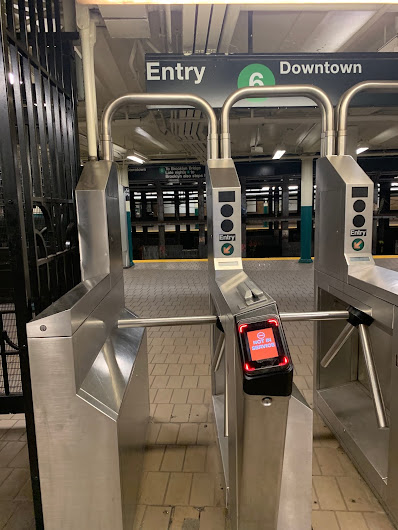 Vinny & O yesterday spotted the MTA's new fare payment system (not in working order yet) at the downtown 6 at Astor Place... 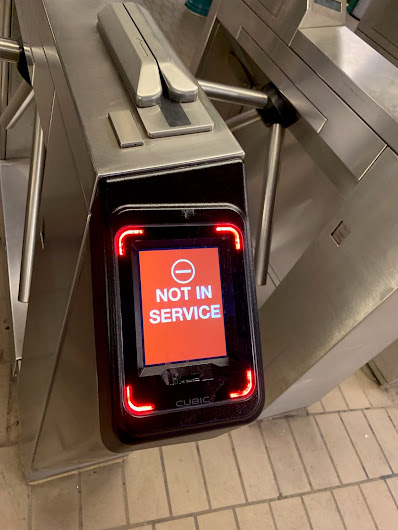 We first heard about this in October 2017, when the MTA board voted to approve a contract to phase in this new digital system.

Per the MTA press release at the time:

The moves help officially mark the formal transition away from the MetroCard, which was first introduced in 1994. ...

Rather than swiping a MetroCard, MTA users will instead be able to use a mobile wallet like Apple Pay or tap a contactless bank card at turnstiles and on buses across the city. The new system will test payment options for all-door boarding on SBS buses, a critical measure for reducing the time it takes for customers to board and travel.

The system was reportedly set to launch this May along a stretch of the 4, 5 and 6 trains and across all bus routes on Staten Island, per amNY.

And a few more details about the tap-and-go system via amNY from June 2018:

In addition to MetroCards, which won’t be completely phased out until 2023, commuters will only be able to use specific, contactless credit or debit cards or mobile wallets from Apple, Google and Samsung to pay for fares during this initial launch.

The MTA won’t unveil its new smart card until February 2021, when it will be available to purchase like any gift card at drugstores and other convenience stores. Vending machines within stations will follow in 2022. 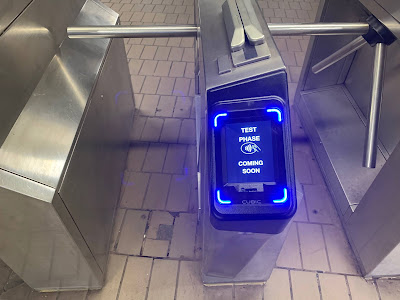 I was in Stockholm recently and notice that subway system uses this or similar system. It appeared to work quite well but it is wise to keep the swipe system in place a bit longer.

instead of spending money this I wish MTA could do something more feasible, like making subway stations not smell like pee and garbage.

If we know the MTA we can expect it to be a painful transition. London's underground (and almost all consumer transactions) use debit contactless payments well, let's move into the 21st century NYC!.

These are also in place in union square at the 14th street and 4th Ave entrance. I wish they wouldn't completely get rid of metrocards - not everybody has a credit card or apple pay/samsung, etc.

Yes, what about us, MTA, we who don’t have credit or debit cards? Typical arrogant short-sighted thinking, the morons.

Those who are concerned with regard to people not having a credit/debit card, the MTA will also make available cards that work with this contactless system. Similar to the Oyster card in London where you pay a £5 deposit and receive an RFID card that works with the Tube. No need for a debit card or credit card - essentially a replacement for the Metrocard.

So, can the Metro Card still function at Astor Place going uptown or not?

So, will the Metro card still work at Astor Place uptown side?

Does any bank card, such as Chase, work?