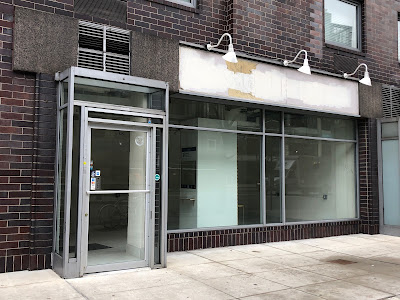 The shop opened in June 2017 here in the base of NYU's Third North dorm.

Until Shiina arrived, the storefront had been empty for nearly two years after Pushcart Coffee vacated the space. The address was previously home to Just Sweet, which sold bubble tea and desserts.

In more positive retail news for the NYU dorm retail space, H Mart is opening soon in the long-vacant shops along the base of Alumni Hall on Third Avenue between Ninth Street and 10th Street.
Posted by Grieve at 4:01 AM

I could never even figure out what Shiina was actually selling - was it clothing, home decor, toiletries, or what? The store had no identity that I could discern, but they sure did waste some money by insetting their name on the floor in TILE.