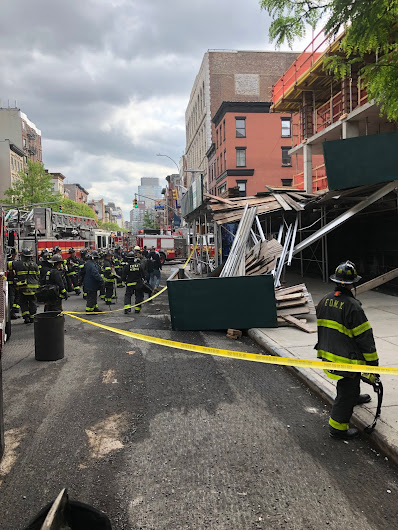 The recently erected sidewalk bridge on Second Avenue at Seventh Street collapsed this afternoon around 4:20, according to witnesses. 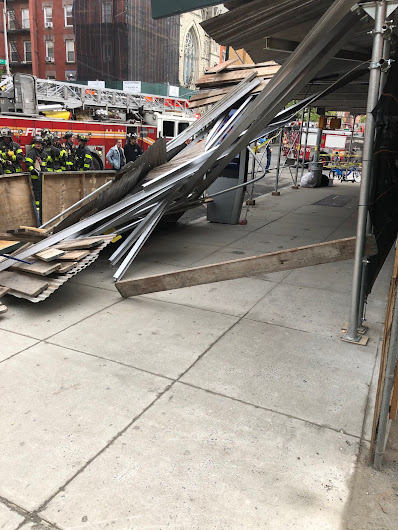 Updated: Workers on the scene said that the collapse occurred after a box truck collided with the sidewalk bridge. (One EVG reader said that a car had cut off the truck, causing it to swerve and collide with the sidewalk bridge.) There aren't any reports of injuries, which is amazing given the time of day on a nice spring afternoon. (Last summer and early fall, this was the site of a traveler-crustie camp site that led to tabloid headlines.) 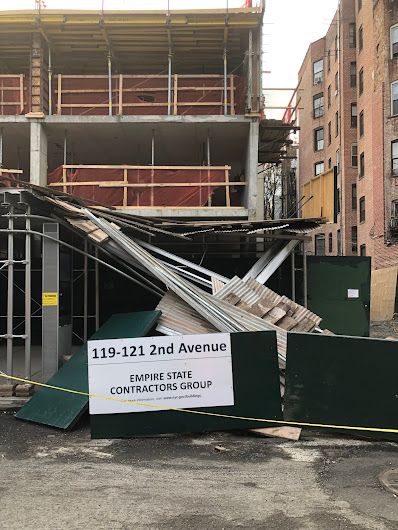 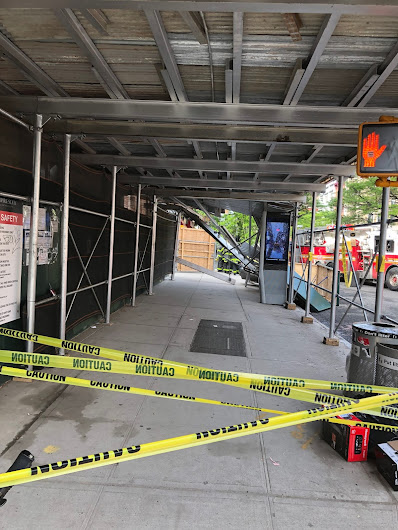 Work started in January here on a seven-floor residential building with 21 condo units and ground-floor retail. Work had recently reached the second floor.

An explosion — due to an illegal gas system — on March 26, 2015, leveled three buildings, killing two men and injuring more than 20 others. The landlord of the former 119 and 121 Second Ave. and two others are still awaiting a trial date.

Thanks to Steven for the photos from the scene. And to Edmund John Dunn for an early alert about the collapse.

Workers have replaced the sidewalk bridge... 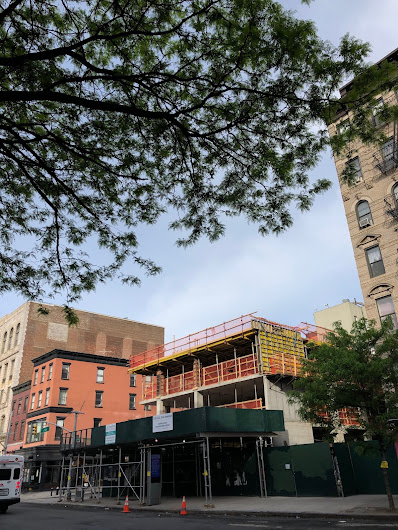 Just walked under it around 10:00 AM and commented how it didn't block up too much of the sidewalk.....perhaps because it wasn't supported properly?

I wish it has taken out that damn LinkNYC

Just 3 days ago, I dubbed this spot the "Crusty Moxie", as a few had already taken up nightly residence. Fortunately, they stay clear during daily work hours, and no one was there to be injured. My block can't catch a break.

This corner is cursed.

So glad the NYPD tickets people who don't have bells on their bikes instead of targeting reckless drivers of trucks and cars.

@7:42pm: Yep. I'd never live in the building that's being put up on that site; too much bad energy there.

The residents will never know

Haven't these people seen Poltergeist?! This is NOT a good sign.

Also, I'm sure LinkNYC had nothing to do with it...

I usually walk around sidewalk bridges, or cross the street. I don't want to be in one if something falls off the building.

Bad juju there. It's like desecrating a grave yard.

OY that poor corner! One has to think it's some kind of karmic thing. So glad no one was injured!