Report: Bartender files federal complaint against Bar None for harassment 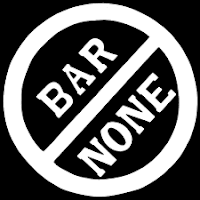 The complaint alleges that owner Frank Steo let his friends use the basement as a crack den, the rain poured into the bar when the weather was bad and she had to put up with gross ogling from the toxic boss’s buddies.

The last straw came on June 18, when a man Day believes is Steo’s cousin allegedly went behind the bar to serve himself. When she complained, the man, Kurtis Burns, put his hands on her breasts, squeezed her butt and tried to put his finger inside her vagina, according to a criminal complaint filed by the Manhattan District Attorney’s office.

A warrant has been issued for his arrest. Burns was previously charged with multiple counts of harassment and assault stemming from a fight near the bar on June 2. The News reported that Burns failed to show up for previous court dates.

Day's attorney says that they plan to file a lawsuit after the EEOC makes its determination. Steo did not return calls for comment to the News.
Posted by Grieve at 11:00 AM

Email ThisBlogThis!Share to TwitterShare to FacebookShare to Pinterest
Labels: Bar None

Sleazy bar is run by sleazy people who use the place to do sleazy exploitative things. Another reason why the extreme number of bars has wrecked the neighborhood.

Extreme number of bars do not wreck a neighborhood, badly run bars do. Millions of people go to Europe every year where most cities have dozens of bars on each block and they come back home to say how wonderful their trip was and how much fun they had. When you make a talking point, your comment, you dilute the conversation to worthless. If everything is true about that bar. It should have been closed a long time ago, and the sexual harassment would not have happened.

I wouldn't exactly call the bar an East Village watering hole.....that neighborhood is not the East Village....correct me if I'm wrong.

@3:41pm: You are wrong. That location couldn't be more totally in the East Village.

And IMO, you can tell what a creepy place it is by the various "sayings" they put on their chalkboard signs outside.

I personally wouldn't walk into there, b/c the vibe it gives me is along the lines of "I'd get something contagious just by being in there."

@Lower East Sider, I spent almost a decade living in Germany, England and Spain, and traveled extensively throughout Europe while doing so, and I don't once remember seeing a block *anywhere* with "dozens of bars" on it. Anon. 11:33 was correct; the sheer number of bars in the EV/LES is overwhelming the neighborhood and locals thanks to the influx of wolf packs of drunks, noise, fights, and attendant garbage. Trust me, if every one of those bars was a crack den you would be screaming about the rampant drug problems in the neighborhood.

Lower East Sider, have you been to European cities like Rome where neighbors are driven insane by the non-stop noise and partying emanating from bars in their neighborhoods? They are just as unhappy as we are about their neighborhoods being transformed into 24-hour party zones. There is such a thing as oversaturation.

You people sicken me. By you people I am talking bout all humanity in 2019, which by the way is starting to remind me of 1719, in the way people are behavin lately. Goddamn savages. This story makes me never want to set foot in a dive bar again. Who needs that kind of environment anyways. Drink alcohol at home, or at a friend's place, or at a civilized eatery. Fuck this shit.

Anonymous at 8:29 PM, your view that every dive bar is considered the same sickens me. You complain about zero progression, but you seem a tad closed minded as well. Fuck that shit, you should stay home and drink. You won't be missed.

@anon 8:29 Agree, all humanity sickens me, too. The nice thing about the internet is that you can any species you want.

@5:35pm: You are 100% correct: if all these bars were crack dens, people would not be so cavalier about the saturation level.

And the saturation level is going to increase with all the in-hotel drinking at the upcoming MOXY hotel.

This neighborhood, IMO, is now really oriented toward those who want to get shit-faced drunk and then cry & scream & fight in the streets. It's disgusting, and you won't see it happening in fancier, pricier nabes. Someone, somewhere, has designated this as the "sacrificial neighborhood," where quality-of-life has no meaning.

My guess is that at least half of the loud, obnoxious drunks in our East Village bars who make us residents miserable do not live in the East Village. They come in their cars and Ubers (seems like busloads) arriving Friday and Saturday nights (and various holidays like St. Pat's Day, Cinco de Mayo, Santa Con, etc.). This is the price we pay for living in a "cool" neighborhood. I try to leave town as much as possible in the summer and only go out Sunday through Wednesday. Sad really.