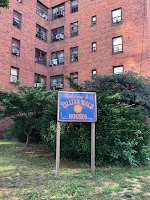 A man was shot and killed early Saturday morning behind the Lillian Wald Houses on Avenue D near Third Street, according to published reports.

The victim, 35, whose identity has not been released, was shot in the face around 2:45 a.m. He died at the scene, per the Daily News.

The Villager reports that the NYPD are checking surveillance cameras they may have captured the shooting and a possible suspect.

There have been at least 4 shootings — all within a few blocks of each other — on Avenue D in the past month or two: two on 8th St, one on 6th St. and another on 3rd St. yet they only seem to get news coverage when someone dies. It would be nice to know if this was one shooter on a shooting spree, or multiple shooters in different incidents, which would mean that there is a much bigger gun problem in the EV than anyone likes to admit.

It would be nice if the Ninth Precinct put beat cops and a substation there.

Enough with cops hanging out in their cars and the precinct.

Get out there and do your jobs not be overpaid glorified crime scene security guards which is what you are - paramedics do more than you!