An unsettling find on 5th Street 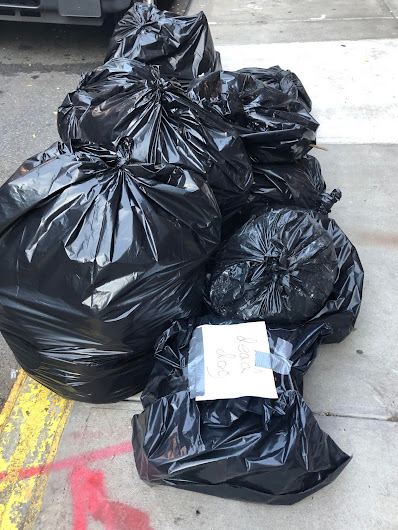 An EVG reader shares these photos from Fifth Street between Avenue A and Avenue B... the reader did a double-take at this note... 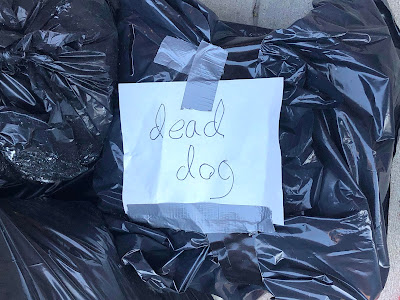 At first, the reader thought this might be some kind of sick gag (as we've seen notes on curbside garbage bags in the past). However, upon closer inspection, it looked as if someone took care to wrap the contents inside the double plastic bag.

Apparently this is an acceptable way to dispose of a pet in NYC. According to the Department of Sanitation website:

The City accepts reports of dead animals. The City will collect a carcass from a public area or street (or from private property – if the animal may have been rabid, was killed by a family pet or scratched or bit a person or pet.) You may also place a dead animal in a heavy-duty black plastic bag or double plastic bag and put it out on the day of garbage collection with a note taped to the bag stating "dead dog" or "dead cat", for example. Animals that may have been rabid should not be put in the garbage. The City cremates dead pets for a fee, though the ashes are not returned to the animal’s owner.

I hope other dogs won't pee on it. It might be just me but I won't leave my dead dog next to the garbage bags. RIP doggie.

Yeah this disturbed me walking by it. FYI... ACC will also accept your deceased dog and cremate for free. They were incredibly kind and empathetic when i lost my dog and trated him with respect, sending me his paw print and poem that made me tear up.

Terrible ending, very sad way for Doggie to go,
just thrown out with the trash.
Makes you wonder how Doggie was treated in his/her
lifetime.

Great, now I am all bummed out to start the day. Thanks for nothin. RIP dog.

I never had a dog and admit I never imagine the city would pick up dead pets this way. Pet owners who do not have a lot of money have an option which is a good thing.

THIS MAKES ME SO SAD

That is awful. What a horrible and sleazy way to treat what I assume was a faithful, loving companion when there is only one final thing you can do for it - to throw it out in the trash like it was nothing, meant nothing. Shame on whoever did this.