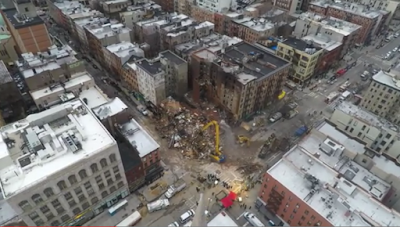 Jury selection is set to start today for Maria Hrynenko and two others for their role in the gas explosion on March 26, 2015, that killed two men, Nicholas Figueroa and Moises Locón, and leveled three buildings — 119, 121 and 123 Second Ave.

The trial could last as long as three months in Manhattan Supreme Court, the Daily News reports.

The News has comments from Kukic’s lawyer:

The defense is expected to argue that tampering was not the root cause of the explosion.

“I think the DA is going to try and show that there were all these irregularities regarding the gas piping,” said Kukic’s lawyer Marc Agnifilo. “None of that is what caused the gas to leak.”

Instead, he said, the gas leak came from the restaurant’s kitchen where workers heard a “hissing.”

“They smelled gas for months prior to the explosion. It was not a one-time thing,” Agnifilo said.

If the fire started in the kitchen, the defendants are expected to argue that couldn’t be blamed because their potential liability would have been isolated to basement operations.

“I don’t think the DA will ever really conclusively pinpoint what the problem was, where the gas came from,” Agnifilo [said].

Hrynenko and the defendants had made 25-plus courtroom appearances since February 2016, which all ended the same — "adjourned/bail continued."

Shaky Cohen's Nexus Building Development Group paid $9.15 million for the empty lots at No. 119 and No. 121 that Hrynenko owned. In a previously recorded transaction, Ezra Wibowo paid $6 million for the adjacent property at 123 Second Ave. that was owned by a different landlord who had no role in the explosion. There isn't any development planned there for now, according to previous reports.

Workers have been quickly erecting the Morris Adjmi-designed building at 119 Second Ave. — officially 45 E. Seventh St. — that will feature 21 condo units and ground-floor retail. The new building will include a commemorative plaque that honors Nicholas Figueroa and Moises Locón.

based on
based on the event so far. . .
This past March, the fifth defendant, Andrew Trombettas, was sentenced to probation and community service. Trombettas had previously pleaded guilty for his role in rubber-stamping a modification to 121 Second Ave. prior to the explosion. The D.A.'s office charged him with two counts of "Offering a False Instrument for Filing in the First Degree, a class E felony."
and
Shaky Cohen's Nexus Building Development Group paid $9.15 million for the empty lots at No. 119 and No. 121 that Hryenko owned

Hryenko should have enough money to buy herself (and if she so chooses Hrynenko and Kukic) a get out of jail bonus with her $9+ million reward.

Talk about the slow wheel of Justice.

The Hrynenkos get 9 million, 4 years later the families of the dead and displaced still have nothing. Some justice.

I hope all those whom are responsible for this devastating explosion will face justice and become imprisoned for their heinous, selfish actions.

So the defense’s position is that the landlord knew there was a gas leak for months and did nothing about it? Time to get a new lawyer. This defense strategy ignores the fact that ConEd had been on site for weeks or months, inspecting the gas lines and that apparently the gas had been diverted illegally for gas heaters installed by the landlord. It also ignores that the lines had allegedly been tampered with by the landlords son Michael Hyrnenko, who is conveniently not able to testify since he died mysteriously before the trial could begin. Michael was seen running out of the building just before the lines exploded, and reportedly did not warn the people inside the restaurant who died. If this is their defense then they are all going away for a very long time.

What kind of lawyer is this ?