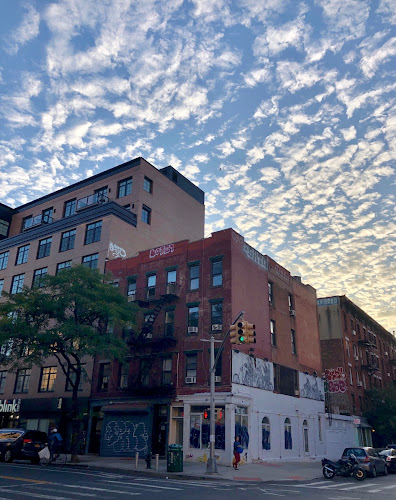 The new owners of the restaurant space at 94 Avenue A — the former Sidewalk — are close to opening here at Sixth Street.

As previously reported, hospitality vets Laura Saniuk-Heinig and Alyssa Sartor are behind the new venture, which we learned will be a revival of sorts for August Laura, an Italian cafe-cocktail bar that opened in Carroll Gardens in the spring of 2016.

Sartor and Frankie Rodriguez, a former Death & Co. general manager, were partners in that now-closed venture. (It was reportedly named after Sartor’s grandfather, who was raised in Carroll Gardens.)

As for what to expect here starting next week (Oct. 9 is the projected opening date), Saniuk-Heinig said August Laura "will have 'East Village Vibes' as opposed to the Italian-inspired Carroll Gardens location." She promised to share more information soon, including whether they will continue on with an open-mic night, a long-standing feature at Sidewalk. (The EV August Laura is listed in part as a "live music venue" on Facebook.)

She did confirm that the two motorcycle murals on the Sixth Street side, created nearly 25 years ago by the artist WK, will remain up. There's also a new mural in progress further east on the building via @EarlyRiser.

The Sidewalk closed back in February after 32-plus years in business. Pini Milstein, who retired, was the former principal owner of the building as well as the operator of the Sidewalk. The building sold for $9.6 million in March.

Previously on EV Grieve:
The building housing the former Sidewalk sells on Avenue A

1-floor expansion planned for Avenue A building that housed the Sidewalk
Posted by Grieve at 4:30 AM

I wish them all the best but I am not sure what "will have 'East Village Vibes' means anymore.

today it is loud and drunk

The dog murals are staying too! 🙌 💩

was a regular at august laura when it was in its previous incarnation in carroll gardens, brooklyn. a great spot. one could enjoy well-made cocktails in a low key and unpretentious setting. a bar run by genuine food and beverage people, not managers with MBAs.

one reason why they left brooklyn is that the landlords of the building are notoriously shady towards tenants. case in point, after august laura moved out, mad cap café soon moved in and had a very popular run but they too were driven out by the same family.

if the new august laura has anything like the vibe of the old, then i think customers in the east village will be happy - it will be a nice reprieve from the current trends in the neighborhood. -- coming from a former east village denizen.

@ignatiius Yes, curse those damn MBA grads... with the gall to try and understand how to properly run a business.

I still have one of those sidewalk drink tokens.

I agree. FUCK 'em. I'll never go there. Sidewalk was a home away from home, the back room was a friend's living room, so many friends performed there, / performed there. "East Village vibes"? BullSHIT. That's incorrect - it shouldn't be plural. Even if they were trying for "East Village VIBE" the only thing such a vibe would apply to is the new overpriced condo at 100 Avenue A. 🙄