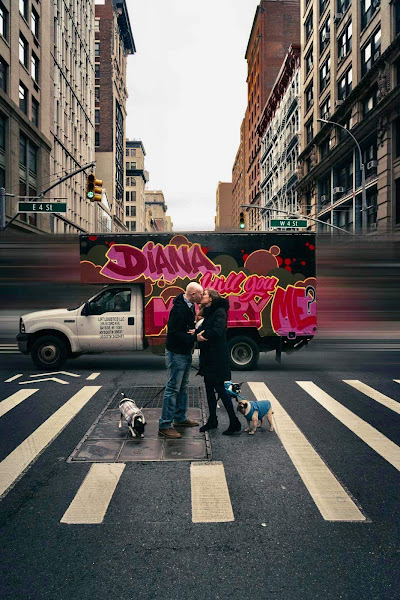 So this past Sunday, when Heydebrand proposed to Catherall, he decided to do it in a familiar location — on Broadway, in the crosswalk where East Fourth Street meets West Fourth Street.

"I loved the setting. It was perfect because it’s the halfway point to where we both grew up," Catherall told me. "It was very thoughtful and appropriate."

Given the time on Sunday morning, there was light traffic on this usually busy Broadway intersection. But it wasn't as if they had time to dawdle.

"Cars eventually honked for us to get out of the way," Catherall said. "But that’s New York ... I would expect nothing less."
Posted by Grieve at 11:00 AM

What a sweet story! Congrats to the soon-to-be-newlyweds. I've been with my man for 32 years and I'm still waiting for him to pop the question.

I love everything about this!

Important rule for men considering a public marriage proposal: don't do it unless you are absolutely, 100% no-doubt sure that she'll say yes.

I love this! Congrats!

Streets for people not for cars ! Why not shut down traffic on Broadway every Sunday morning ? (Or on Lafayette where there's even less traffic). Imagine Lafayette from Houston to Astor Place, open for people walking and riding bicycles. Can be really nice and will have ZERO effect on traffic.

Aw. So sweet. The world could use more love and unison right now. I wish the happy couple the very best together in their futures.

Thank you. Made my year.

That man moved me once. What a lovely little individual. Would love to meet his dog.

Diana’s family has a long history in the East Village. Her grandmother owned the Baltic Polish restaurant on 1st Ave and 1st St. In the 70s and 80s where Lucy of Lucy’s Bar got her start. She later owned the Downtown Beirut Bar.

Diana’s family has a long history in the East Village. Her grandmother owned the Baltic Polish restaurant on 1st Ave and 1st St. In the 70s and 80s where Lucy of Lucy’s Bar got her start. She later owned the Downtown Beirut Bar.

This is so sweet!