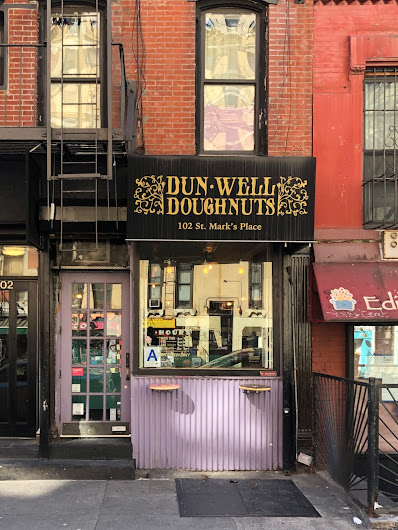 As we first reported on Tuesday, the vegan doughnut purveyors decided to shut down this outpost to work on other areas of the Dun-Well business.

In order to focus upon new endeavors at our flagship Brooklyn location and to expand our wholesale operations, we have decided to close our St. Mark's location this month. This is a bittersweet decision as we have loved being part of the St. Mark's community over the past few years. We hope you’ll continue to support us as we move into our next chapter!

Dun-Well can now be found in almost 20 NYC locations including several Whole Foods Markets and cafes throughout Brooklyn, Manhattan and Queens and we plan to expand our reach to bring our doughnuts to an even larger community.

Christopher Hollowell and Dan Dunbar opened the first Dun-Well in East Williamsburg in 2011. They debuted on St. Mark's in July 2016, shuttling in fresh doughnuts daily from their Montrose Avenue HQ.

The posted hours today are 9 a.m. to 9 p.m., though you should likely get there sooner rather than later...
Posted by Grieve at 7:00 AM

If only they had installed a 24 x7 glaze waterfall.

I believe they are already closed. I tried going last night and they had a sold-out sign on the door.

Time to hit up Krispy Kreme for an Original Glazed donut, the best donut in the known world.