Le Sia is back in action on 7th Street 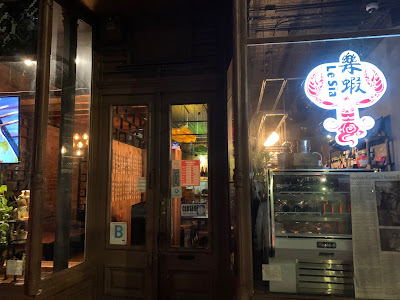 EVG reader Jonathan Michael Fung shared this photo from last night, showing that the paper had been removed from the front windows. (It's not immediately known what changes ownership made to the Chinese restaurant during these recent weeks.)

Le Sia debuted in January 2018, and quickly received positive notices for its seafood boils and various skewers. As Eater put it — "NYC’s Most Exciting New Chinese Restaurant Dares to Pile the Heat on Seafood." And then there was The New Yorker: "At Le Sia, Find Nirvana in Crawfish Domination."
Posted by Grieve at 4:20 AM

The food here is so good. Friends and I were worried that it was one of those "Closed for renovations, FOREVER!" cases. Glad that's not the case.