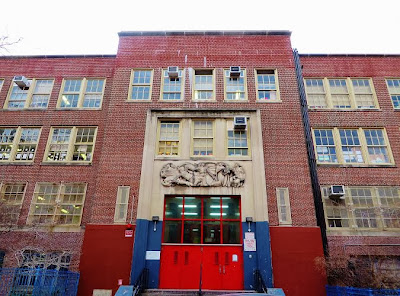 A few years ago, residents who live by PS 64 at 600 E. Sixth St. near Avenue B were treated to a morning wake-up call courtesy of alarms from the school.

That was January 2014. As we're hearing, the morning alarms returned several months ago. One resident said this occurs between 6 a.m. and 7 a.m. "The alarm sounds and all the emergency strobe lights go on in the school, lasts for about a minute," the resident said. "This happens every every school year until there's enough complaints about it for them to get it fixed."

One resident recorded a video the other morning... you can see the strobes... the alarm doesn't come through as loudly as if you're right next door, but you get the idea...

Noise pollution is a form of toxic waste, like methane it is odorless and colorless and because of that Our Leaders ignore it.

Wake up, get out of bed! Run a comb across your head. Go downstairs and grab a cup, look out, you're running late! Grab your backpack and you hat, take the Citibike without a flat.

This noise has been driving me crazy! I had no idea where it was coming from, figured it was a neighbor with an especially loud alarm clock. I'll stop cursing him.

YES!!! NEVER KNEW IT WAS FROM SCHOOL..

Now can we do something about NEW JunKie couple that screams on Steps of school at all hours!