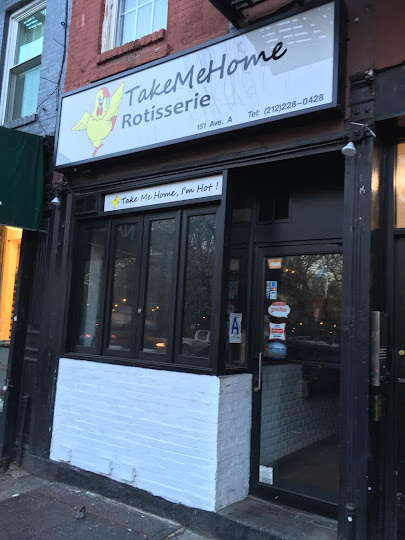 The quick-serve restaurant at 151 Avenue A between East Ninth Street and East 10th Street has been dark for the past 10 days or so.

There's no answer on TakeMeHome's phone. And Seamless says the restaurant is now closed.

TakeMeHome did close without a note or notice in December 2014 — just three weeks after opening. (We were told the owner's wife had a baby.) Unfortunately, the closure looks more permanent this time.

In any event, people we talked with generally liked the food — large portions for the price. Never seemed to catch on, though.

San Loco closed here in February 2014. High-profile restaurateurs Ken Friedman and April Bloomfield were seeking a liquor license to open a bar cafe here in May 2014, though CB3 did not offer their approval, and the two decided not to pursue the space.

After being closed without any notice for the past two weeks... the restaurant is back serving chicken... 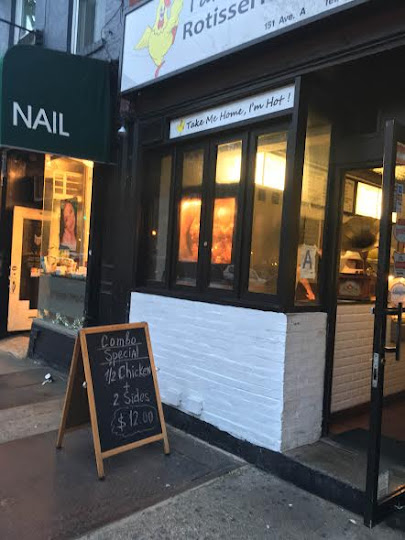 always looked pretty gross to me... anyone ever have a good meal here? better / worse than senor pollo?

Good. On Halloween when kids would come into the store and yell trick or Treat he yelled at them to leave. One kid asked why he was so mean and he responded with "GET OUT NOW!" I told him he was an asshole. Good riddance.

I used to order from here. Good chicken, though on the small side, and I appreciated the sides. Their chicken went from $9 to $15 in a matter of months. That turned me off.

These guys charged $12 for a meal with two sides, and it was GOOD! Relatively healthy, not pizza or some other trendy overhyped thing, but tasty, reliable, homestyle food! This is a bummer, and whoever takes over this lease is going to have to pay 4x what these guys were.

I thought their chicken was DRY. Senor Pollo ROCKS!!!

I'd like to use this space to point out that the food at Big Arc Chicken on the west side of 1st Avenue between 13th & 14th streets is really good. The last time I was in there, they also had made stuffed grape leaves that day. (This is not always available.) $15 for a whole delicious chicken and a small order of grape leaves...which was more than enough for me and a friend. It isn't a fancy place, but the food is fresh, lots of turnover and I've always found the staff very helpful and accommodating. They do sell more than just chicken, too. Good stuff.

Next to open here, a dessert store.

They shoulda let April Bloomfield in there

It was great. I hope they come back.