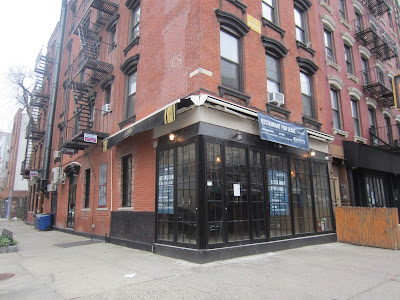 In recent years, not even proposed restaurants have been able to make the space on the northwest corner of Avenue C and Eighth Street work.

This month, the proprietors behind the cocktail bar Mother's Ruin in Nolita will appear before CB3's SLA committee for a full liquor license for a proposed pizzeria.

According to public documents on the CB3 website, the space will feature 22 tables with 56 seats and a bar for 13. (The configuration also shows five sidewalk tables. The previous restaurant tenants here also had sidewalk cafes.) The proposed hours are noon to 2 a.m. (until 10 p.m. for the outdoor seating).

The documents include a sample menu... 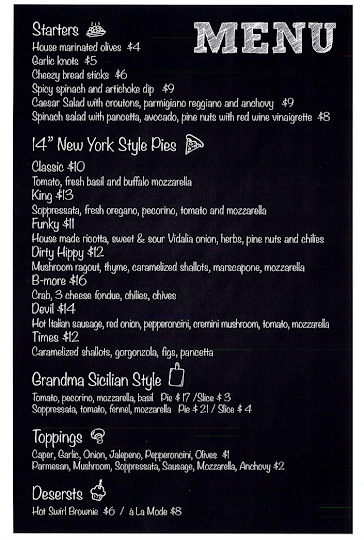 In January, an applicant appeared before CB3 for a sushi restaurant. CB3's SLA committee would only approve a beer-wine license with a midnight closing time. The applicant was seeking full liquor with a 2 a.m. close. In addition, according to CB3 meeting notes, "this applicant has no experience operating or managing a licensed or similar business and has no developed plan or team to operate this business." So apparently the applicant decided to move on.

As previously noted, this corner space has been home to Lumé, the "Epicurean drinkery," ... Life - Kitchen and Bar … which had taken over for Verso. Other restaurants here in the past seven years include Caffe Pepe Rosso and Caffe Cotto.

Previously on EV Grieve:
East 8th Street and Avenue C, home to 5 restaurants in recent years, is now on the market
Posted by Grieve at 4:22 AM

Pizzeria? That's an understatement. The area along C is way way over liquidated.

I am tired of restaurants asking to stay open until 2 AM, the kitchen will close at 11 so the last 3 hours of the evening is dedicated to getting customers drunk, meaning this is yet another bar.

There aren't any pizzerias over there. There's a dollar slice place up a couple blocks and then the old Moon Pie on 3rd, which has been out of biz for a while. This would be a welcome addition. I don't think anyone can make this location work, though. Not sure why. Maybe the police station across the street.

Stupid. I vote for sushi.

Yes! I love pizza. Stop complaining: you complain if it's a bar and say you want something that's not a bar. Then it's a non bar and you complain anyway. Guess where there's lots of open space with no nothing? South Dakota. Move there maybe.

The whining is completely predictable at this point. Get off my lawn, kids.

...yes, let's all move to South Dakota and open bars.

@ 10:07. Stop complaining? Why does a pizzeria need a FULL liquor license? Maybe the 4th Avenue post office should also have a liquor license, for those of us who like to drink while standing on line.

"Why does a pizzeria need a FULL liquor license?" The nature of the restaurant business is that little money is actually made off the food. Aside from being able to have a wider range of offerings thus making it more likely that diners will order a drink or second drink with dinner, the markup on liquor is by far the strongest and more profitable than beer or wine. So, they want full liquor because they want a successful business.

"Maybe the 4th Avenue post office should also have a liquor license, for those of us who like to drink while standing on line." Two points: Would it be so bad if a government institution actually made some money and pulled some of its weight instead of being a huge money pit? Also, it could help take the edge off when dealing with the clowns that work there. (No, I actually don't advocate the post office selling booze. It was a joke. Plus, I wouldn't trust gubbamint booze!)

I notice they don't offer anything vegan. (I can make lettuce salad with oil and vinegar at home.)

I'm not complaining, necessarily; I haven't gone inside this space since it was a bakery, and there are several places in the neighborhood that serve awesome vegan pizza.

I agree completely with Anonymous 11:59, though: most people know that restaurants pay their rent by selling booze; if it had been possible to support the rent selling just bread, cakes, coffee, and sandwiches, this place would still be a bakery.

Gruppo on Ave B btwn 6&7 has awesome pizza & terrific salads. They also have always been fine with just a beer & wine license. ... though they did move from their old location because Croman took over the building & wanted to charge a ridiculous rent... which is exactly happening at this building on Ave C & 8th Street that Croman owns. It's not right residents have to suffer with pseudo bars instead of good food at reasonable prices.

If they're intention is to mostly sell liquor to cover the rent or make profit, then just call it what it is -- a bar. Don't disguise for it to be a 'pizzeria' or a 'restaurant'. Be honest about it; you'll likely will be approve by CB3 for that coveted license. Call it a pizzeria-themed bar or whatever. Stop insulting our intelligence.

The rube "move to" line. I guess it was overdue.

Enough already. Let's get a pizzeria on Avenue D!

This is a bad idea. As someone who lives one block down on 7 and C, I am exhausted and annoyed of the scene here on the weekends. Most are boisterous, obnoxious, and oblivious to those who live here. Sometimes due to intensity of the noise from those walking down the street (drunks and bros) who party at the Alphabet Lounge, I have to turn my air conditioner on to tune it out, otherwise I can't sleep. I live on the fourth floor of a walk up. I can see and hear everything. This will just exacerbate the already growing situation of this mess. While this still is a neighborhood for all to enjoy, businesses need to remain cognizant of the people who live here, people like me and others, who maintain and take pride in our streets, who deserve to live in an area that is not a fuck you I don't care combat zone. No to this pizzeria. How about a cafe?

This is great! As much as I love Two Boots, sometimes the 45-minute wait is too much. I could even call in the order and go pick it up myself here.

A pizzeria I'm doubting its success many already and a lot of pizza orders are take out to begin with so a sit down place not sure. But an old school Clam House could work with a beer and wine alone.

I agree with one the last recent commenters. A pizzeria is a bad idea for the neighbors. They will have to sell a lot of pizza and coke to stay afloat. That space is doomed. It has changed so much, no one stays there on a long term basis. If they open, people will hang out until the wee hours of the morning. I say pass.

If you you have to rely on selling more alcohol to keep afloat than the food then you have failed and are not meant to be in the restaurant business. A block away is Zum Schneider and it only has beer and wine license; and they are fairly soing well.