The Lyric Diner has closed once again in Gramercy Park 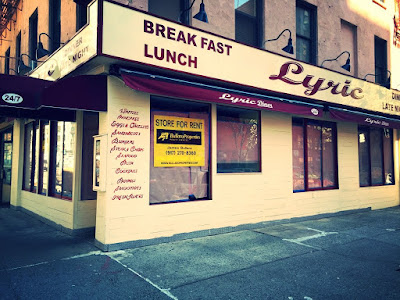 Heading out of the neighborhood for a quick post... the second time around didn't work so well for the Lyric Diner on Third Avenue at East 22nd Street. The restaurant recently closed... and the for rent sign has now arrived.

In August 2012, the Lyric owners decided to shut down the diner... they reopened the space as Taverna, a white tablecloth Greek restaurant. That concept lasted six months. The owners then decided to reopen the Lyric in October 2013.

Email ThisBlogThis!Share to TwitterShare to FacebookShare to Pinterest
Labels: Lyric Diner, restaurants that are now closed

de Blasio "welcomes" any investigation. Sheldon Silver once said that. Not that I'm saying that de Blasio is corrupt. Just that this looks and smells corrupt. I didn't realize that the city had spent $70 million converting Rivington Street from a school. $70 million? Among other things, I'm curious about the salaries of the Village Care executives...

Sorry, I meant to post the 7:26 remark at the article about the AG investigation.

Lyric, we hardly knew you. A shame, really, as this iteration was very good, far better than its surly, flash-frozen predecessor. Lyric brought in great coffee, expanded their menu, and hired friendly wait staff. And it was always crowded. So... what happened? Wasn't it Deep Throat who advised Bob Woodward to "follow the money?"

And while we're here, Gramercy also lost Mariella, the pizza joint on the Northwest corner of 16th and 3rd. They'd been there since 1978, I'm told. Shuttered for at least six weeks; yesterday, the auctioneers came through. Any idea what happened?

The old Lyric was a much better place to get a good affordable meal that's the two concepts that came after it. Taverna was brining in prepared food from outside and reheating it, an that quickly failed. The New! Improved! Lyric was just an overpriced Diner, and once they raised prices they lost the sSVA and Baruch tudents who used to pack the place and bring it to life most evenings and weekends. They tried serving liquor and put in small bar but that didn't work either. The grumpy owner told everyone on staff at the last minute they were closing the same day, and never bothered to put up a sign thanking his loyal customers. Waiters in a nearby restaurant said they had always had money problems, but their bad manners were probably a big part of the problem. I'll miss the place but not the attitude, Kthxbye!

Blame it on the foodie culture, rising costs, changing tastes and a reluctant next generation of diner owners...

I agree, the old Lyric was better. My last time there a few weeks ago the waiter was cursing out the kitchen staff who weren't bothering to read the daily specials and kept making the wrong food. Tables were returning plates and no one seemed too happy.

Lately the place was mostly deserted, fewer people are going to diners and the neighborhood has changed a lot. The little wine bar and the Pizza Bar across the street also closed down. At least three new condos are going up, soon this area will be like 6th Avenue with a canyon of tall buildings. Meanwhile a block north you can't even get into the Taproom, which has been packed every day since it opened, and has decent food, especially the flatbread pizzas. But it's another loud Bro Bar with big screen TVs, not a place to have a quiet meal.

Like most neighborhoods we are also losing our supermarkets: Food Emporium on 32nd St closed, D'Agostinos up on 35th St closed down on Saturday, and the other D'Agostino on 25th St might close too. We also lost the Met Food on 17th St. late last year.

I noticed the old Rodeo Bar still has the For Rent signs up. Wasn't Phebes supposed to be taking it over, or did that deal fall through?

I don't know if this is a factor, but it was reported that Mariella had a problem with their gas line recently. Not sure why that would cause them to fold & bring in auctioneers, unless maybe they know what happens to restaurants that don't have gas service, but that is surmise on my part.

Part of the reason that Mariella closed was probably the opening of that shiny new pizza place at 20th & 3rd - Lunetta.

As for the Lyric - well farewell. They jumped the shark once they decided to close the original diner. There's a better diner at 23rd & 2nd anyway.

While we're here, should also note that Ralph's Ices on 24th & Lexington - a seasonal outdoor window - is not coming back this summer. Apparently the building was sold. It was a fun concept while it lasted.

About Ralph's Ices: phooey! We just can't have anything quirky in NYC any more.

And if the building was sold, are we in for another glass-condo-ization?

"New" Lyric was horrendous I'm sorry. Usually I wax poetic about local businesses closing but I came here for brunch with my mother and wife and we had truly one of the worst brunches (or meals in general) of all time at Lyric... Bacon was as close to raw without being "pork sashimi", OJ was literally in a thimble and probably the worst part... my wife orders French Toast with fresh berries, it comes out without berries "because we ran out"... no warning they ran out, no offer of substitution? It's fine to say "sorry we ran out of X" but to just deliver something to someone without a key component is ridiculous. Sad someone lost their business but Lyric 2.0 stunk.

Ralph's Ices? I don't think kidults have ever heard of it and they prefer People Pops.

There are lots of Ralph's in the local area - but this was the only one in Manhattan. It's a locally owned business and it was very busy on summer nights.

According to DNAinfo, George Kalogerakos, the Lyric's owner, closed the Lyric because he had suddenly decided to "retire.' But according to one of the waiters he didn't tell anyone until the day they closed that they were all out of a job. The waiter says the decision to close wasn't about retirement but money problems since business was down, and he could have sold the business if it was profitable. Plus he still runs another diner uptown and that one isn't closing down. George didn't even bother to put up a sign thanking his customers of 31 years or saying goodbye. Bye Lyric, we will miss what you used to be on those busy late Friday nights and Saturday mornings, but not what you turned into in the end.

Retired? No way. George owns the Ritz Diner on 61st and 1st ( and it looks just like the Lyric, neon sign, red booths and all) and he just opened another Greek Retaurant called Under The Bridge on 59th and 1st. It was featured in Eater. He should hire new PR team if that's the best spin he can come up with.